My first life experience of nightlife was living in London. Yes, I did that too. I was young and stupid and did ridiculous things, like walk late at night all by myself. Yeah, I did that too. It was mostly upsetting because not even my roommate wanted to take these late night walks with me. At night the city looks different and it feels so wonderful.

Then I got married and moved to Copenhagen to live in my husband's homeland. Nightlife there was also exciting but this time I had someone to take long walks with me. People were out late all night. It felt like a city.

When we moved to the big city of Seattle I expected this kind of nightlife. We ditched our car in California, donating it to a Jewish organization, and arrived in Seattle on the Coast Starlight at some crazy hour of midnight. This was going to be our new home for a while. The city looked so quiet so I figured it was the hour.

Then Mr. Peyos noticed something interesting. Starting at 7pm downtown Seattle shuts down. What??? I thought this was a city? Now, I like to sleep early and wake up early so 7pm is cutting it close to bedtime for me now so it is rare if I am ever out late anywhere unless it is for a good reason.
Yesterday was my first experience in the "happening" downtown nightlife. My daughter and I needed to do errands and then we would finally plop our bottoms down at a movie theater in Ballard and watch Frozen. We did our errands close to home, which included the much needed hair wash at the beauty salon. After that we followed a guy up to Capitol Hill. He was alone on his bike, no cargo and was insistent on trying to bike faster than us. Little did he know that we had the BionX on the bike. It makes zero noise. If it was hidden more you would never know. So, we kept us his pace and he tried to go faster. By the time we reached the high point in Capitol Hill he gave up and looked exhausted. We gave a happy ring and passed him. At that point he realized we were not on a regular bike. It was funny and got us up the hill faster. I don't like sweat and despite the use of the BionX I was getting a workout. I mean I have a kid and a tummy baby.
We did our Central District/Captiol Hill errands and then made the slow up to Fremont to pick something up from my bike twin. 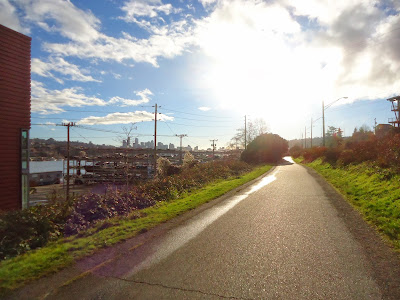 See how beautiful it was despite the weather forecast predicting rain, boring rain. I am so glad we were able to soak that up. All those building in the distance make out downtown Seattle. 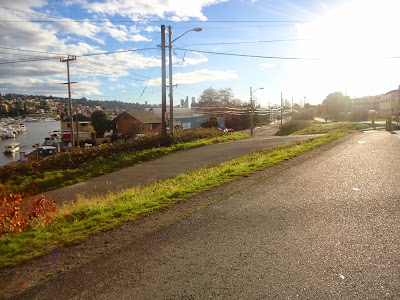 I tried really hard to take a picture of the Space Needle but that blinding sun. 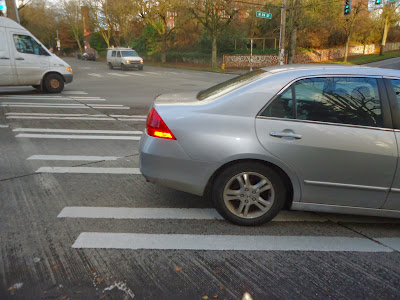 Then we did the imaginable and biked up Sweat Hill, sorry I meant Fremont Ave. So we waited at this crosswalk to safely get over and this car kept inching forward on the red blocking the crosswalk. What is the hurry???  We met our bike twin Sara and her adorable daughter close to the zoo and made our clandestine exchange of a handlebar mount for my phone. I can't hear the phone if it is tucked away in my Mary Poppins bags (or X2 bags). Our bike ride to Ballard was pleasant. Sara introduced us to the Greenwood Greenway which had a lot of qualities to reduce speed for car. I liked it. 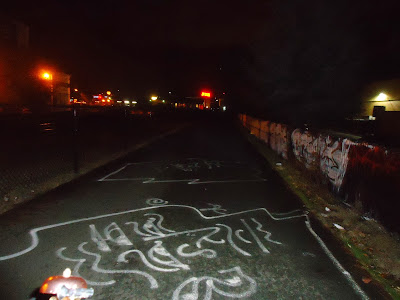 Our movie started at the insane mommy hour of 5:05PM and by the time we got out it was late. I also did the not smart thing of going to the bathroom BEFORE leaving the theater. Trader Joe's was on the way back to the Burke Gilman so we made a shopping pit stop. A man said to us, "what's the point of walking when we can just bike everywhere? We should just put wheels on our feet!". Aren't those called roller skates? It was dark so interesting commentary was expected. We found the path on the Missing Link but it was so dark I couldn't tell where I was suppose to bike, so confusing. We got on the Burke and realized it was scary. I mean, great place to be murdered scary. I biked so fast. I am so glad I got the D-lux because it comes with a mega light that will light up the road. See. I was able to zip through there. When we finally reached Fremont I felt better and calmer but where the heck were all the people? It was dead. Nobody was out. Maybe everyone is shopping downtown? 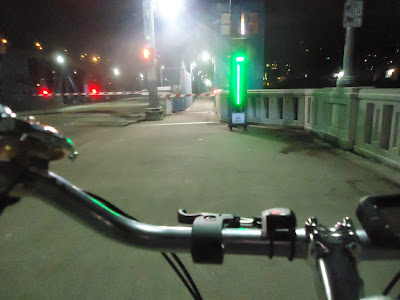 We managed to get to the Fremont bridge when a boat needed to go across. I tried to take a picture of our number but it that ended up fuzzy. 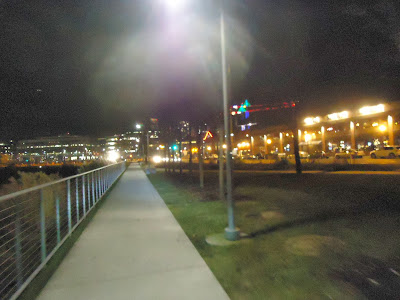 Biking along Lake Union was beautiful. Lot of boats had pimped out with lights. We got to look at them at a slow pace. When we got closer to downtown I figured that I will need to be really careful biking downtown. You know the shopping rush. I was oh so wrong. We biked on Westlake without issue, witnessed lot of really early drunk people. Downtown is dead at that time of night and I don't recommend that you take strolls, lots of weirdos, the kind you don't want nothing to do with. 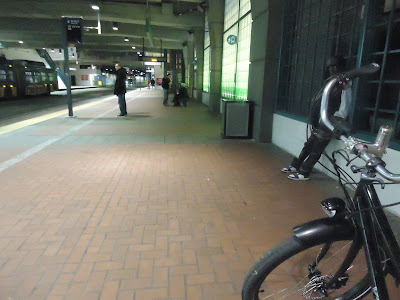 Now that I have the BionX I figure I don't need the train but turns out someone fell asleep on the bike. Yes, even 9 year olds can do that. I biked us to the International Station and hoped that we would be able to get on the light rail. The bike takes up a lot of room and I feel it is rude but look at the station, nobody. We might be safe to get on the train. 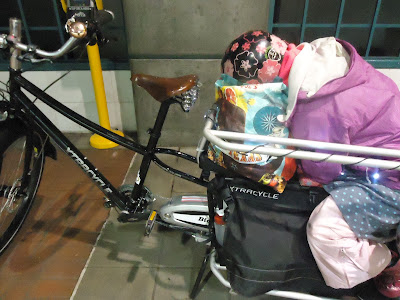 The final picture is of my kid passed out. She was exhausted. She missed all the excitement of the nighttime downtown population, the drug addicts and the guy who offered me drugs, didn't think that would ever happen. While she was passed out at the station an guy on the opposite platform kept yelling at us, "What's with the motorcycle? What's with the motorcycle?" In the dark we might look like a motorcycle but in this light we just look like a long bike. We made our way home and it will be a while before we do that nighttime ride by ourselves. I was pretty terrified on the Burke Gilman at night. Downtown was no joke either. I was kinda scared. When we got home Mr. Peyos expected this story from me. So, next time he will go with us. He was just sick so he was unable to leave the bedroom.
at December 24, 2013