My Edgerunner is Magical

On Sunday, the coldest day of the year the whole mishpacha (family) went up to G&O to pick up my bike. I gave a brief low down of being at the shop and picking up my bike. I have yet to master the art of overpacking the bike. Every time I put something in those X2 bags I feel like Mary Poppins. What else can I fit in there? Better yet, what is hiding in there. At first I wasn't going to upgrade to the fancy bags but now I am just happy I did.

Mr. Peyos met us there on his bike but got lost because he has never been anywhere north of the Fremont. I gave him biking instructions and he arrived all out of breath because biking uphill on 8th Ave NW was more than he was used to. Oh Danes and their flat flat roads. Then again, he has never biked our pinky pie kid around so he has NO idea. We actually arrived before him despite taking our sweet sweet time looking for a backlava at Target. As I have said, my kid loves fashion. She would NEVER dream of wearing something blue on her head especially when the rest of her is bright pink. So, doubting the selection at Target City downtown we ventured in and found a pink one. So we left G&O prepared to bundle our cutie fruity kid to now freeze: snow pants, snow boots, baklava gloves. Okay, we were set.

Back to Mr. Peyos. Why didn't he bike across the Fremont Bridge? Oh, remember Vertigo? Yes, he kinda has to go through the Ballard Locks. This means we will have to go that way to get home despite the fact that I am not so excited about it.

We left the store, went to a nerdy game store across the street and then biked to find our way home. Turns out Mr. Peyos came down Market NW and wanted to go the reverse route he used to arrive. When we arrived I looked at him and said, "no way!" It was a total death wish. A lady in her car had a sticker on the front window with a middle finger. That is really how people in cars saw the street, a big middle finger to anyone not in a car. So, we did what I hate most, bike on the sidewalk. At some point I was just tired of trying to balance behind s-l-o-w pedestrians I got off the bike and walked a little, but I hate walking too, ugh. 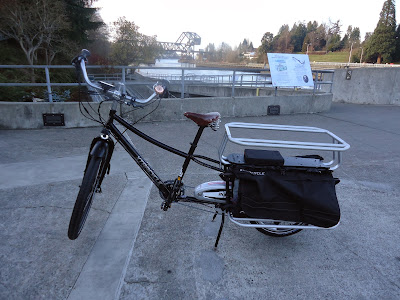 We finally made our way to the Ballard Locks and I was worried about all the weirdos just standing on the bridge and not being able to get across. This has been an issue and I was not excited about maneuvering around stupid people. See, I did it! Oh and yeah the wheel does that. It doesn't really bother me but boy does it swing a ton. I love that Rolling Jackass kickstand. Where have you been my whole life? 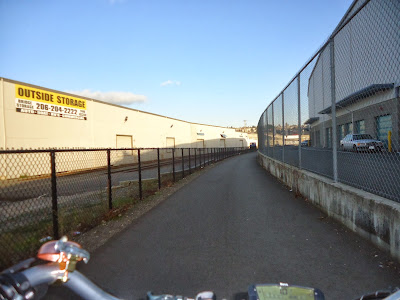 Then Mr. Peyos took us on this detour. Apparently this is the Ship Canal path. This runs parallel to Nickerson street. You learn stuff every day right. You can see my BionX consol and my shiny bell I added. 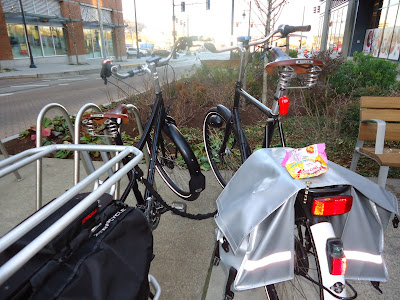 Once we arrived at Lake Union the whining began. My hands are cold. I am hungry, blah blah blah. Turns out my kid put on the WORST gloves for this cold weather. She is 9 and I figured she has better sense than to wear the gloves she had on. At that point we stopped at the Bartell's on the Amazon campus and bought food, I meant nosh. Mr. Peyos found those pocket glove warmers and we indulged our kid in a $2 set so that she would be quiet. I brought a lock but was lazy to we locked our bikes together. You see the lock running from that HUGE Dutch bike to mine? 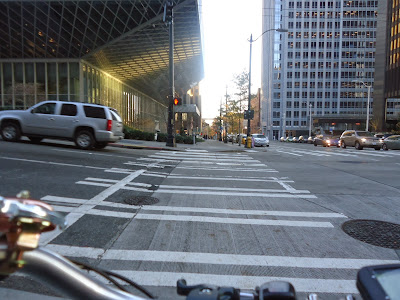 Then comes the nightmare of downtown. I am so sorry, I was not able to capture this because of my complete grumpiness. EVERYONE was shopping downtown. We had to walk. The horror of walking. Again, I hate walking, even worse downtown when people walk s-l-o-w. That is the Seattle Downtown Central Library. It looks nice even in cold weather. By cold I mean in the low to mid 20's F.

The rest is boring and ugly. You really don't want to see our route from Dearborn home. You can smell the street if I put a picture here, eww.

Here is our route. It was almost 15 miles and a large chunk was spent making our way past shoppers. The Edgerunner made the ride fun and fast for me. This was only day one. Wait until I tell you about bike pool. That is a whole different post.