Monday night we had the possibility to see the white stuff and maybe some people saw this but down here at 200ft we saw nothing. I actually don't worry about snow biking conditions. What I worry about is ice. I have had several falls on ice and I really do not want to repeat this. Last year when we took several icy walks my daughter and I skated down the hill from the house. We had not intended to skate down the hill but we did. I don't care if I am walking or biking, I just don't want to fall. I already fell once a couple of weeks ago on the bus for crying out loud. It was slippery and my skirt got caught on a lady who was intent on having her legs extended in the isle. I was sore for a couple of days but managed. Biking was easier than walking.

Now that the weather is getting colder the possibility of snow is upon us but Cliff Mass has said we are in a neutral El Nino year, dry dry and boring. Why are us folk in Seattle so scared of snow? For one, I think their are about 14 snow plows and they don't cover the whole city. At some point they only work on arterial streets and roads where the mayor might be traveling. So, a lot of us are left with ice and snow. Then the city does what I always hate and announce that we should all get off the road and take the bus. Well, that never works because the buses go to poo and even more poo when they have to go up a steep hill. How is taking the bus going to help anyone?

Your best bet is the Light Rail if it is going to where you need. So, the next question is what to do when you are on a bike.

On the coldest day of the year I am going to pick up my bike. Sunday morning was expected to be 16-17F. Burr! I had my kid wear her snow pants and this caused a lot of whining. Then we made it out into the fresh air and whoosh her face looked cold. We don't own a baklava ski mask thingie and I have never seen a cute pink one. I want to make her wear a baklava but if it does not suit her style sensibility she would rather freeze. I thought we were going to have to stop on the way home but before we ventured to wait for the number 5 we went to Target. Guess what I found? A super bright pink baklava. Who would have thought? So, we hopped merrily on the 5 and I allowed my kid to eat chocolate early in the morning while we waited.

So, we were on our way to go retreive my mythical unicorn of a bike in 23F /-5C conditions. Who get's a bike in December? Well, I do! This pregnant, crazy lady finally gets her bike on the coldest day of the year. What bike? Yes, the mythical Edgerunner. My bike twin has experience with her bike and several thoughts on how it handles. I was excited to meet her and see her bike. We had a lot to talk about. Madi from Family Ride was also there but I was being a pain in the butt to Davey Oil so we didn't get chance to chat.

Luckily, I have tested several bikes this year and also had several conversations about my bike options from about a bazillion people. So, my range of what I have learned this year has been interesting. Plus, one day I read about installing the BionX. I don't know, I felt like I needed to know how it went on the bike.

For now I am pooper scopper out of my mind tired and still need to work on my term paper so I leave you with the winter photo of my bike. I will write about our experience making it home tomorrow. 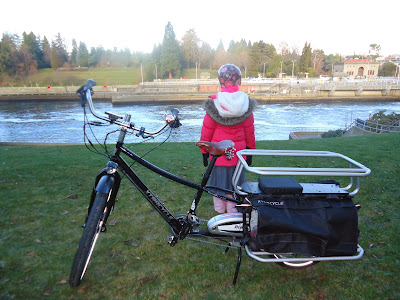