We don't own a car and don't want one. Just because we have a baby doesn't mean that we have to buy one. On several occasions I have had to use a car because I am not approved to bike yet, blame the c-section. We needed stuff.  I feel pretty good and a week afterwards I was all pumped to get on the bike but I won't because I don't want to hurt myself and not know it.

Turns out it really freaks me out to put the baby in the car. For one, I am the only person who can drive in this family so when we borrow a Zipcar I am putting my little sweet baby behind me, not within instant viewing. I don't like to drive alone with him so I make people sit in the back to watch him. You think I never had a kid before the way I act.

Baby Peyos gets really fussy once he is put in the car seat. He could be stoned out of his mind after having a ton of nursing but NOOOOO, he knows he will be strapped down without a view of mommy (his food source and pillow).

I rather take the bus but with the better Seattle weather means the bus has become one big cloud of medicinal herbs. It stinks like sweat, fast food and pot. You don't believe me? Get on the bus and you will know exactly what I am talking about.

So now I am researching a walking option where I can push the baby and schlep stuff because I ain't biking with him any time soon. 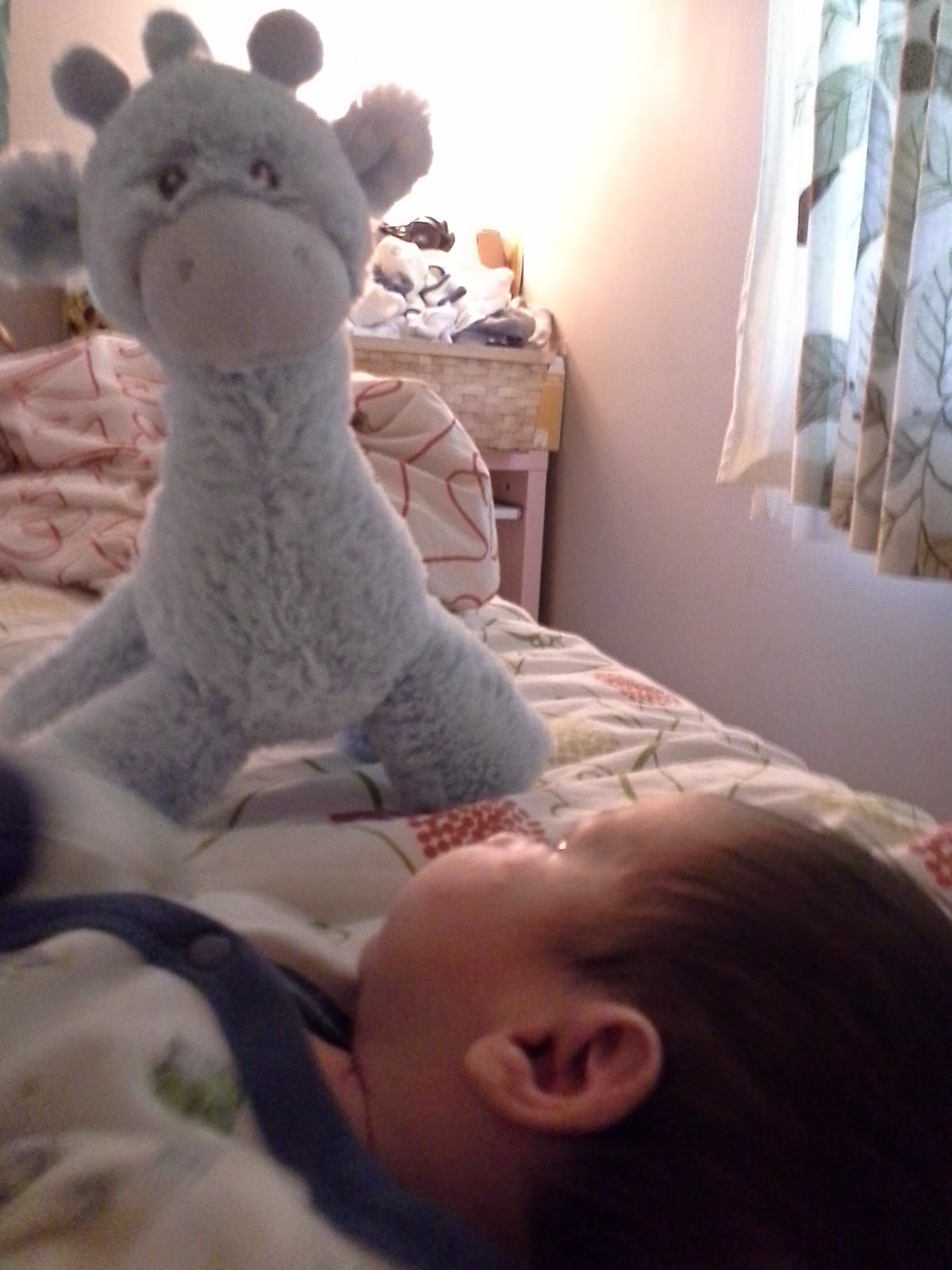 In the meantime he does have his awake moments, including his epic battle with his arch nemesis, "The Blue Giraffe". He really does not like the giraffe and upon seeing him seemly tries to punch it.

I am hoping that this week I get time to figure out this whole strolling option..ughh

Banned from Biking/Perpetually pissed off for a while

I haven't ridden my bike since April 13th and this has put me in a bad mood. Little did I forget that even though I feel pretty good for having a baby taken out of my abdominal I am banned from biking 6 weeks after delivery. At my first postpartum appointment I asked about biking and exercise and was given a flat out no, followed by the risk of giving myself a hernia. Hernias are for old people and me apparently.

The worst part of this is that I can't even ride a short distance to go to the store. It also means I can't feasibly walk somewhere carrying something other than my baby. We sometimes would walk to the store but I am not allowed to carry anything but my bundle of baby. AHH! So, this has put me in a foul mood.

We are now in May and it is the Bike Challenge. Worse, the Broadway Cycle Highway opened and I just get to watch. In order to inagurate the ride I have forced my other bike people in the house to bike on Broadway. This week Mr. Peyos took a ride on Broadway because he was made to get my pain pill refill. He biked from down by Lake Union up to Capitol Hill. I have no idea how he did it without going over some bridge. He was nice and took a picture for me just to rub it in. 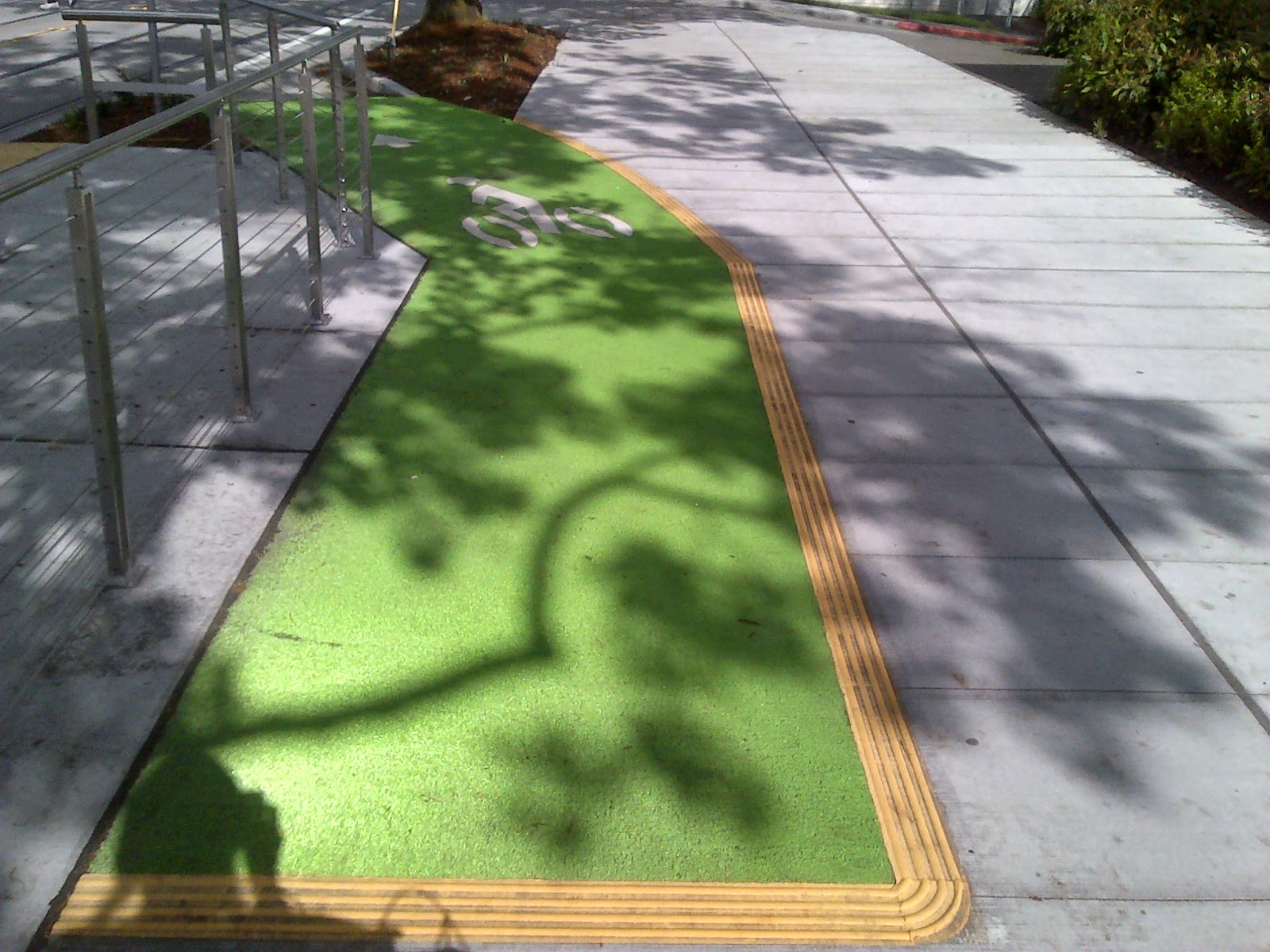 I still have no idea where on the new Broadway Bike Highway this is but I hear it is kinda confusing.

So, Baby Peyos has an appointment and I thought it would be fun to have the other kid bike on the cycletrack. We took the bus with the bike and then let our kid make her way and obey the laws of traffic. 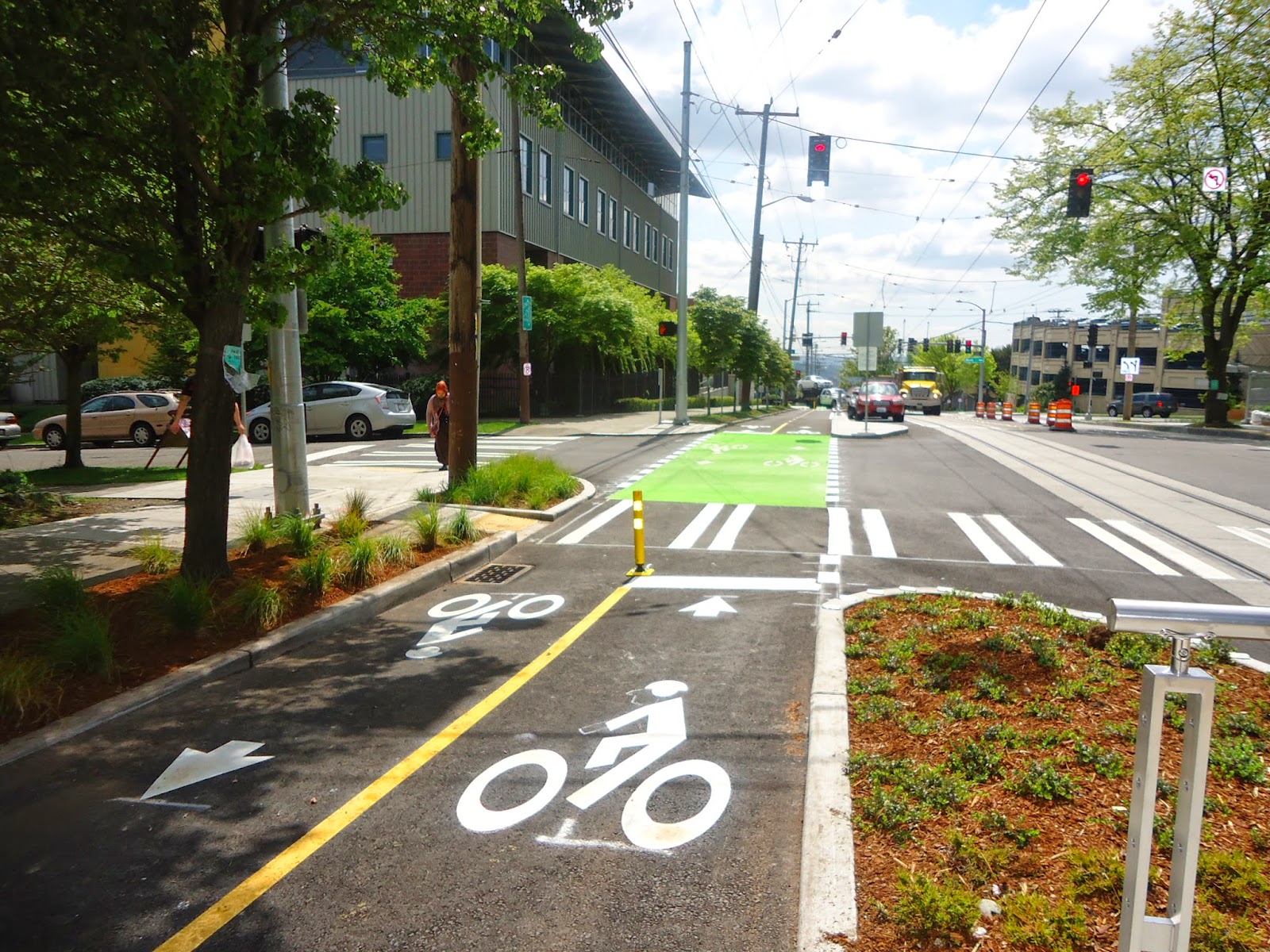 This is the point where we got out of the bus and we allowed her to ride. If we were more adventurous we would have let her bike from the beginning, but we were pressed for time. 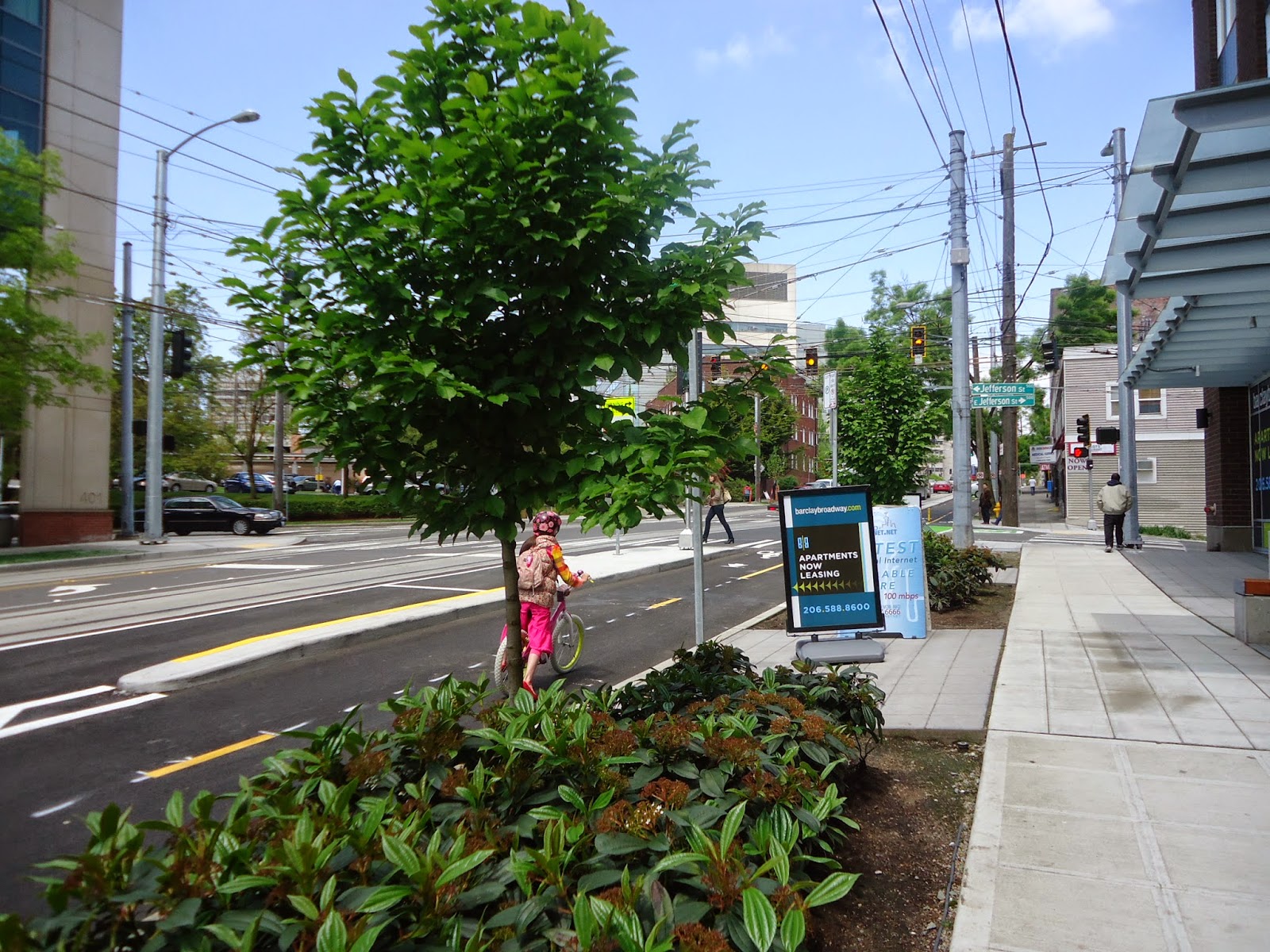 And she is off.... She was excited and oddly enough we felt safe allowing her to do it. 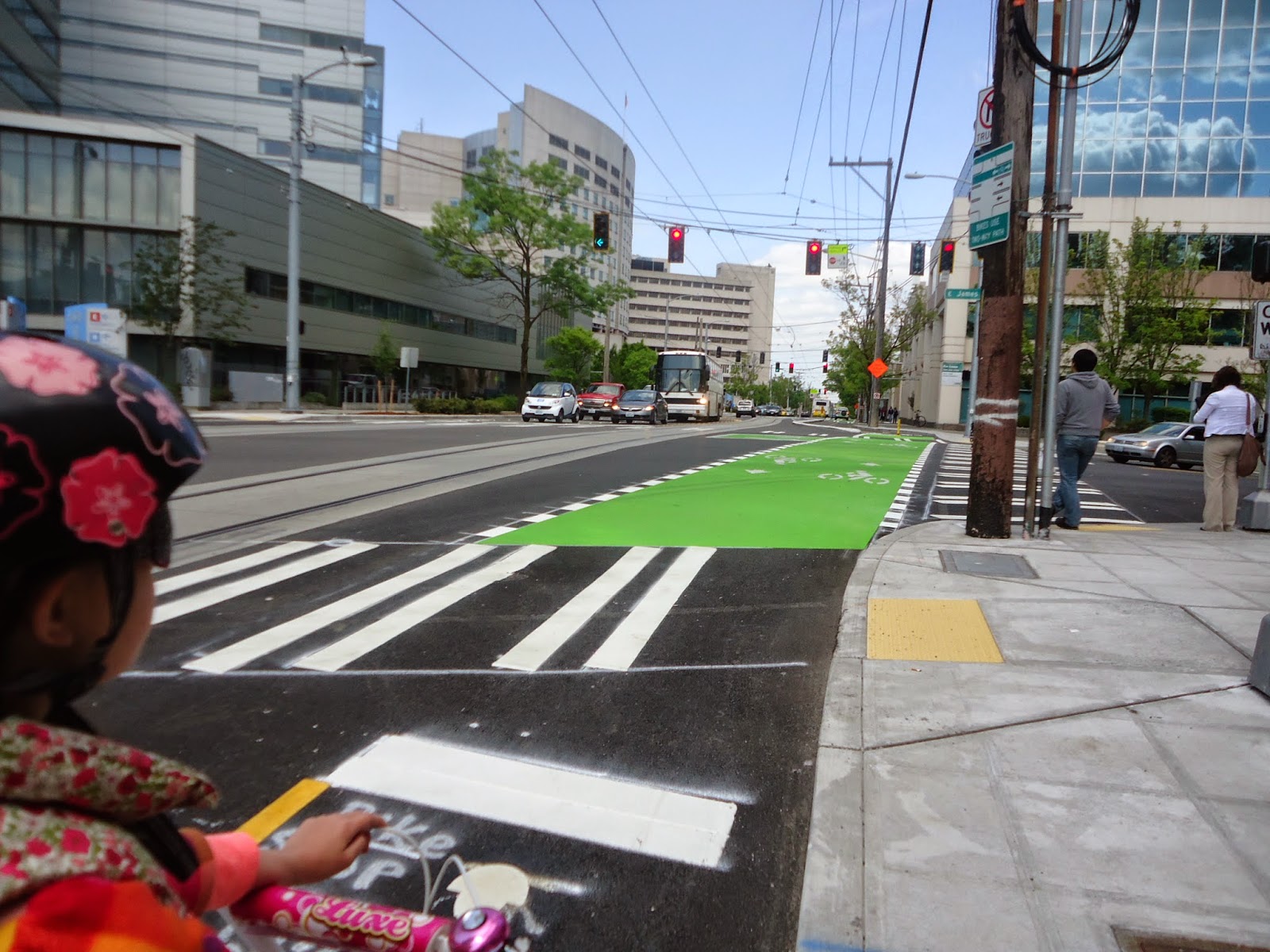 We are waiting at the light. The Bike light is kinda off but you can't tell. She was pretty careful when we got to the parts with the painted green. She knew this was a danger zone and we had to look out for cars. 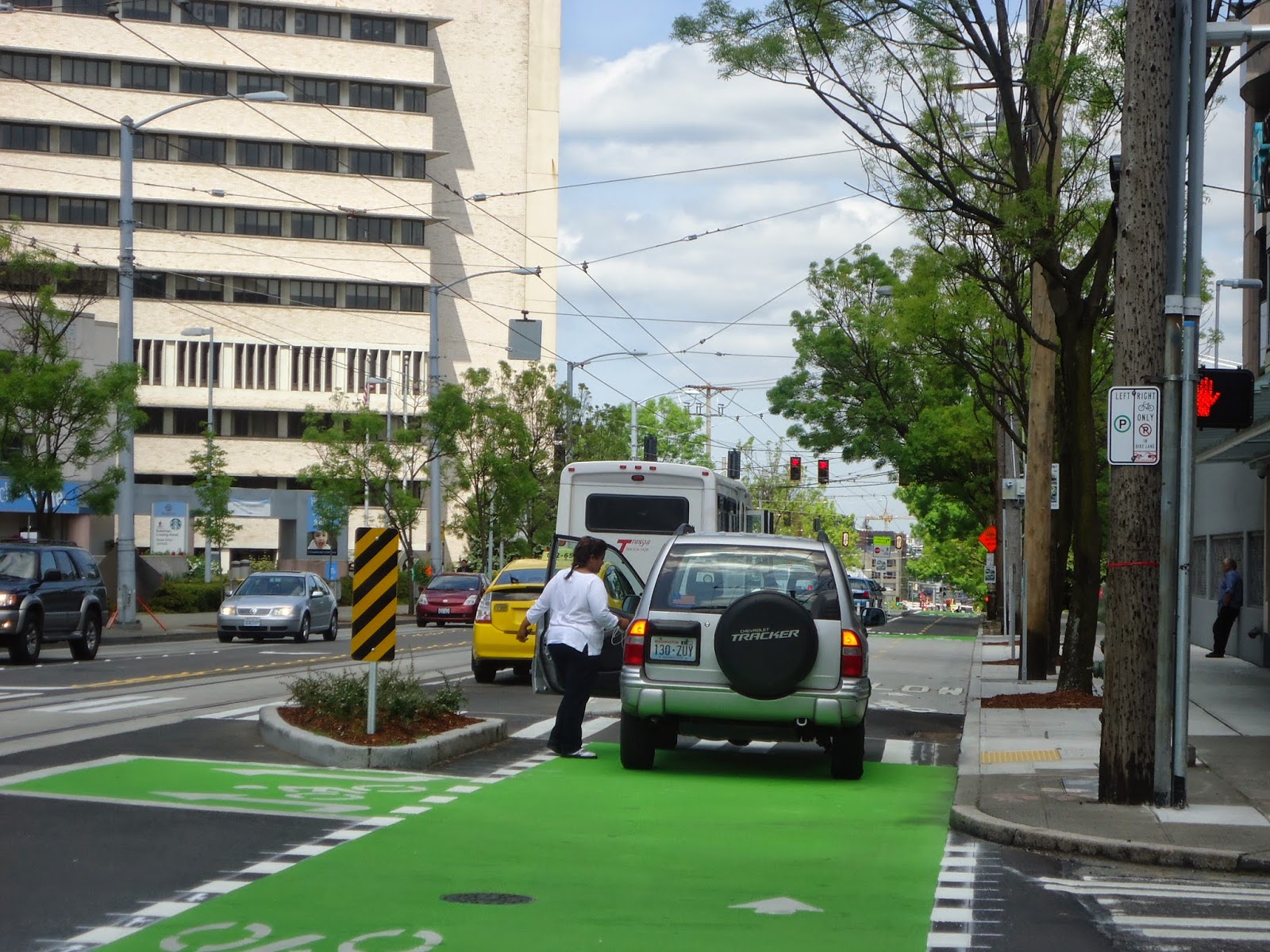 Ahh, JOY! This lady decided to park in the Bikeway! Well, fracka lacka to her. I was yelling at her from across the street. This made her paranoid so she rushed to make her get away before I got closer to get a close up of her face for my camera. She actually had space to park right behind that taxi but NO, she had to park there. Man, people are stupid!

On the way home we took the light rail and I managed to lift the bike for my kid: 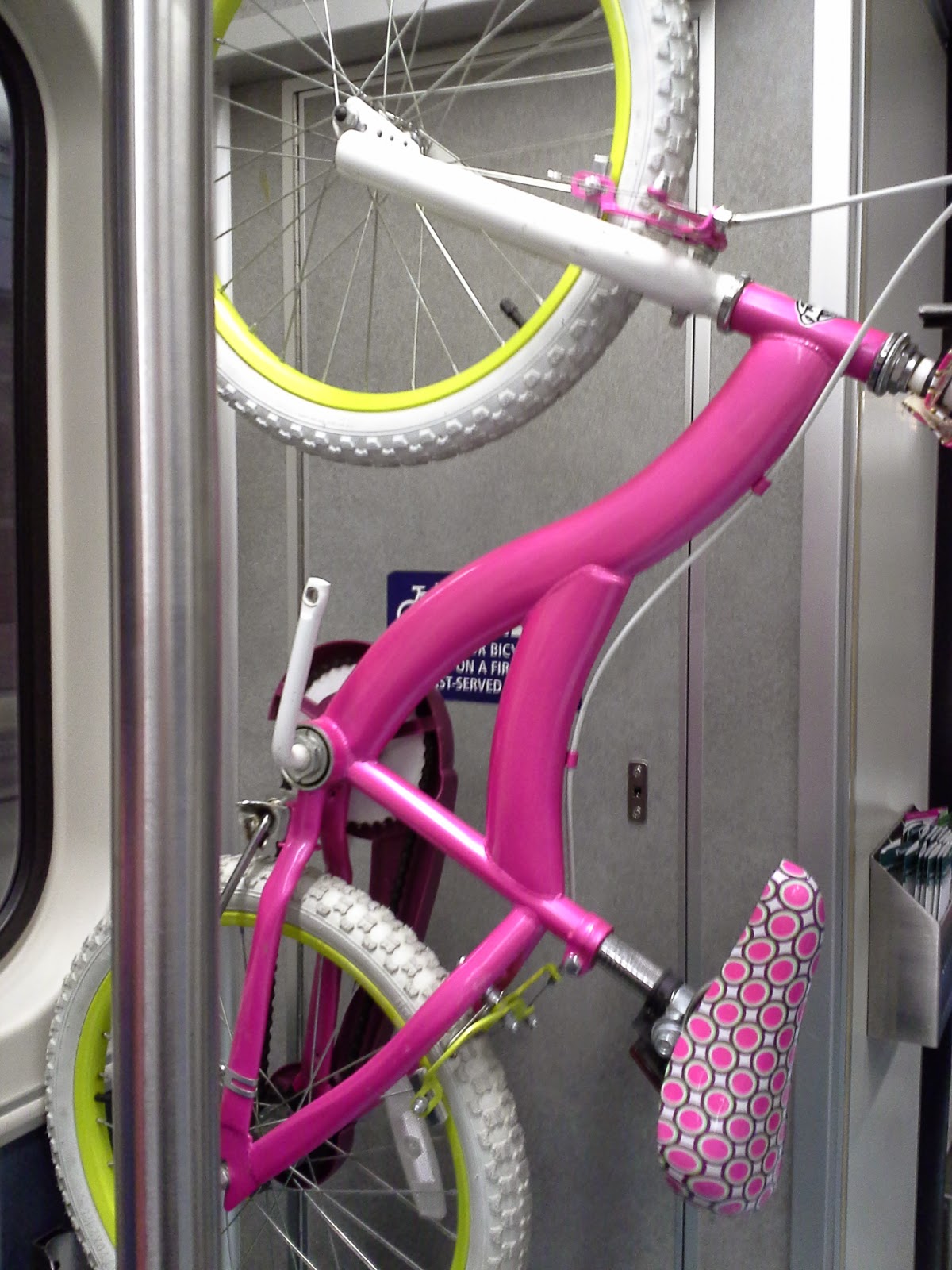 Before we could do that we went to Target and my kid parked her bike next to this sad bike: 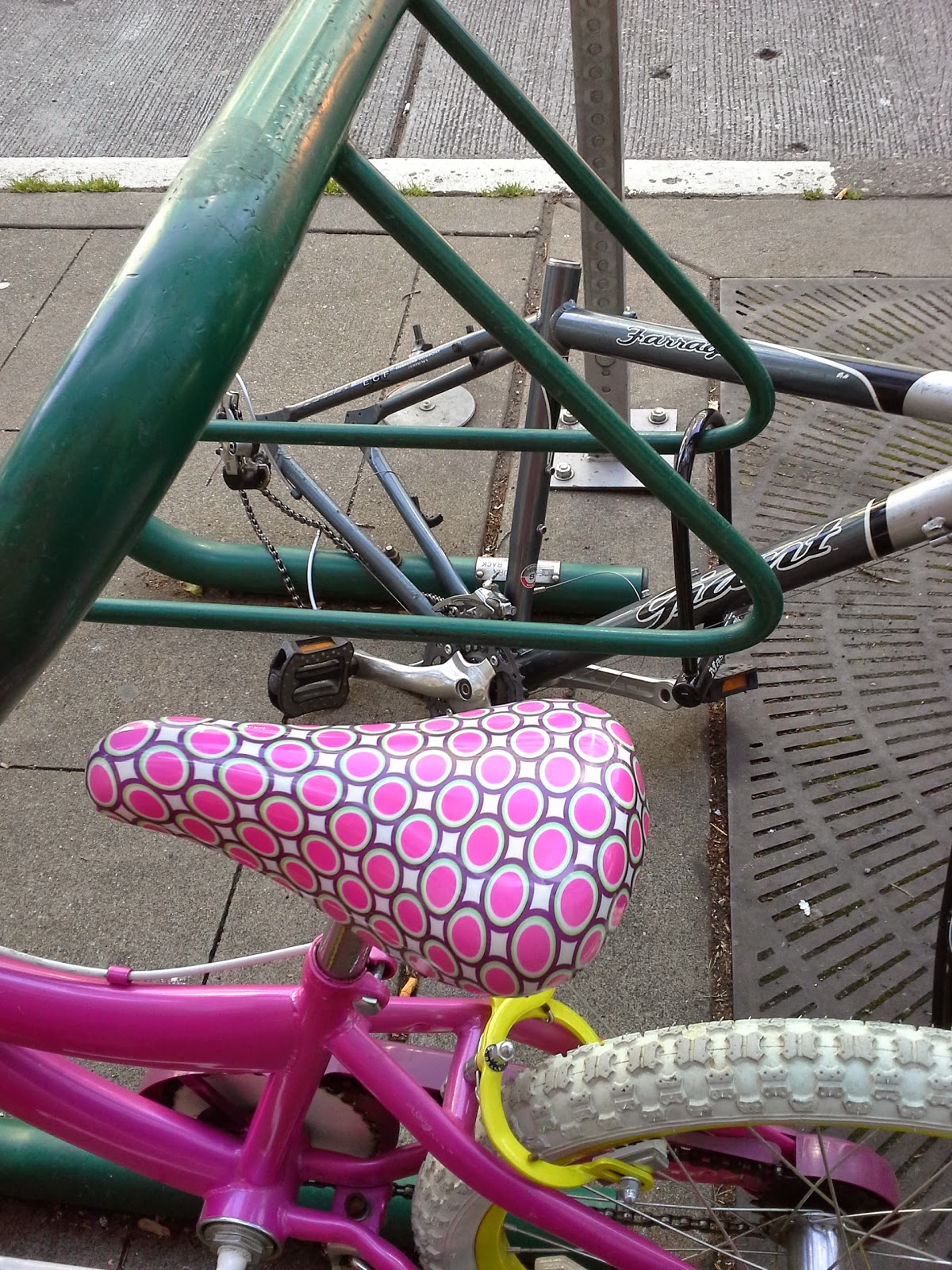 The bike looked new and had a lot missing. See how they locked it? They just locked part of the frame. The handle bars, wheels, and seat were missing. So sad.

Finally, we made our way through the Columbia City Farmers market and lookie lookie, an Edgerunner: 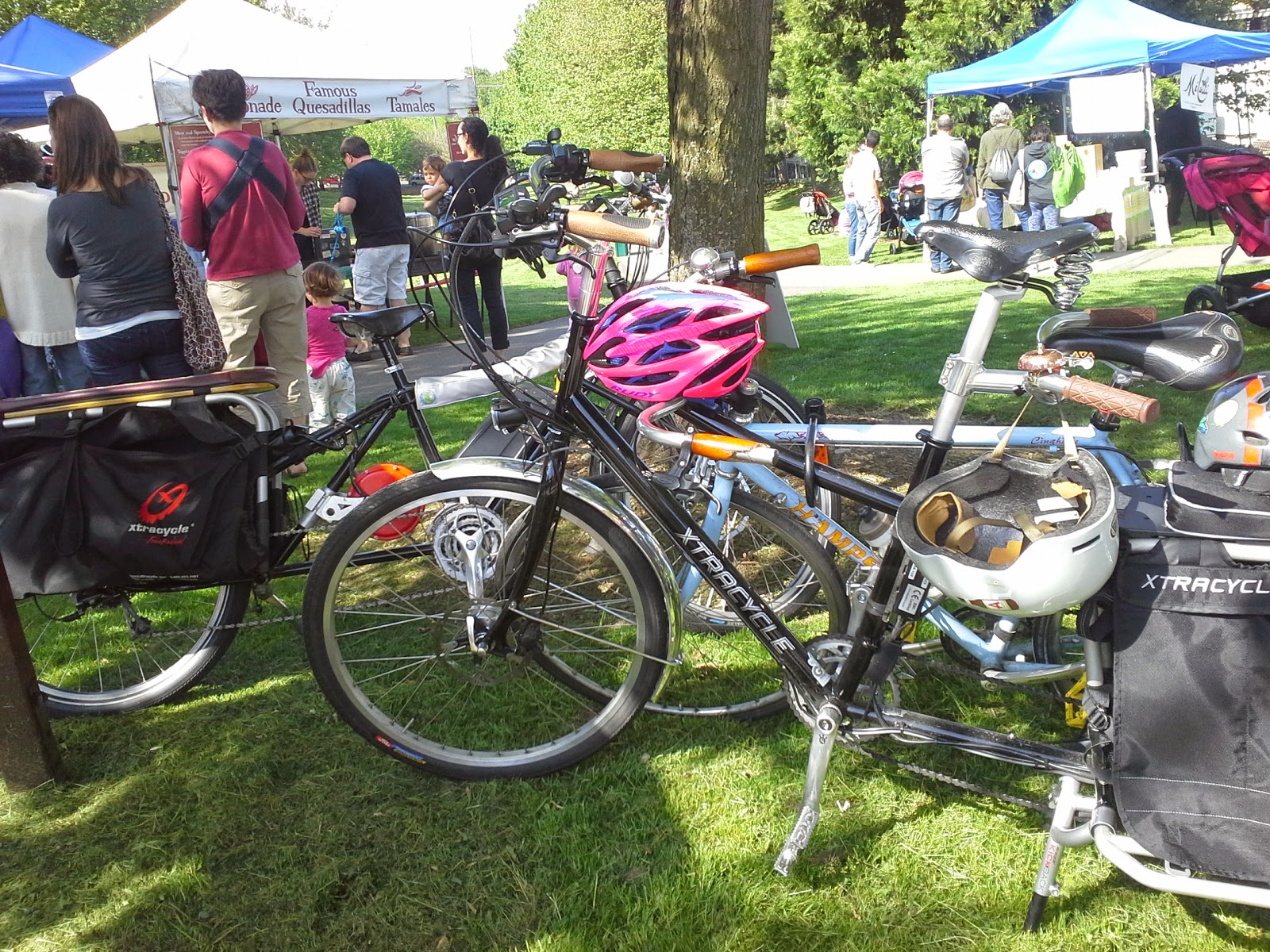 Who are you?? We have not encountered each other before. In any case, it was nice to see two cargo bikes down here in the hood. I feel alone sometimes. In any case, I will be walking until I get my doctor approval and not prone to hurting myself. The we have the whole adventure of figuring out what to do with Baby Peyos. Makes me wish I was rich just to buy another bike, sigh.
at May 07, 2014 3 comments: