Aww, the chagim are over and we are just left with Chesvan, bummer. My last post was about murder and I did not even blog after that. Maybe you thought on my quest for cheese something happened. Well, I am here and survived the many meals we ate during Tishrei. Actually I made sure we ate lots of vegetables. Our guest were forced to eat a plethora of raw vegetables because they taste better that way and I am lazy. We had some interesting meals, many of them were just slapped together and eaten with raw vegetables. If you don't eat those things that grow from the earth you would have had a hard time at our house. My daughter finds kids who eat pure candy a mystery. Sure she likes candy and we let her have it but never in a way that she screams, "CANDY!!" She's just like that.

Hold on a moment! What did our sukkah look like? There you go, in all the glory of a typically Seattle Sukkos. Cold and burr. I heard about the heated sukkah someone had, including a sink!! 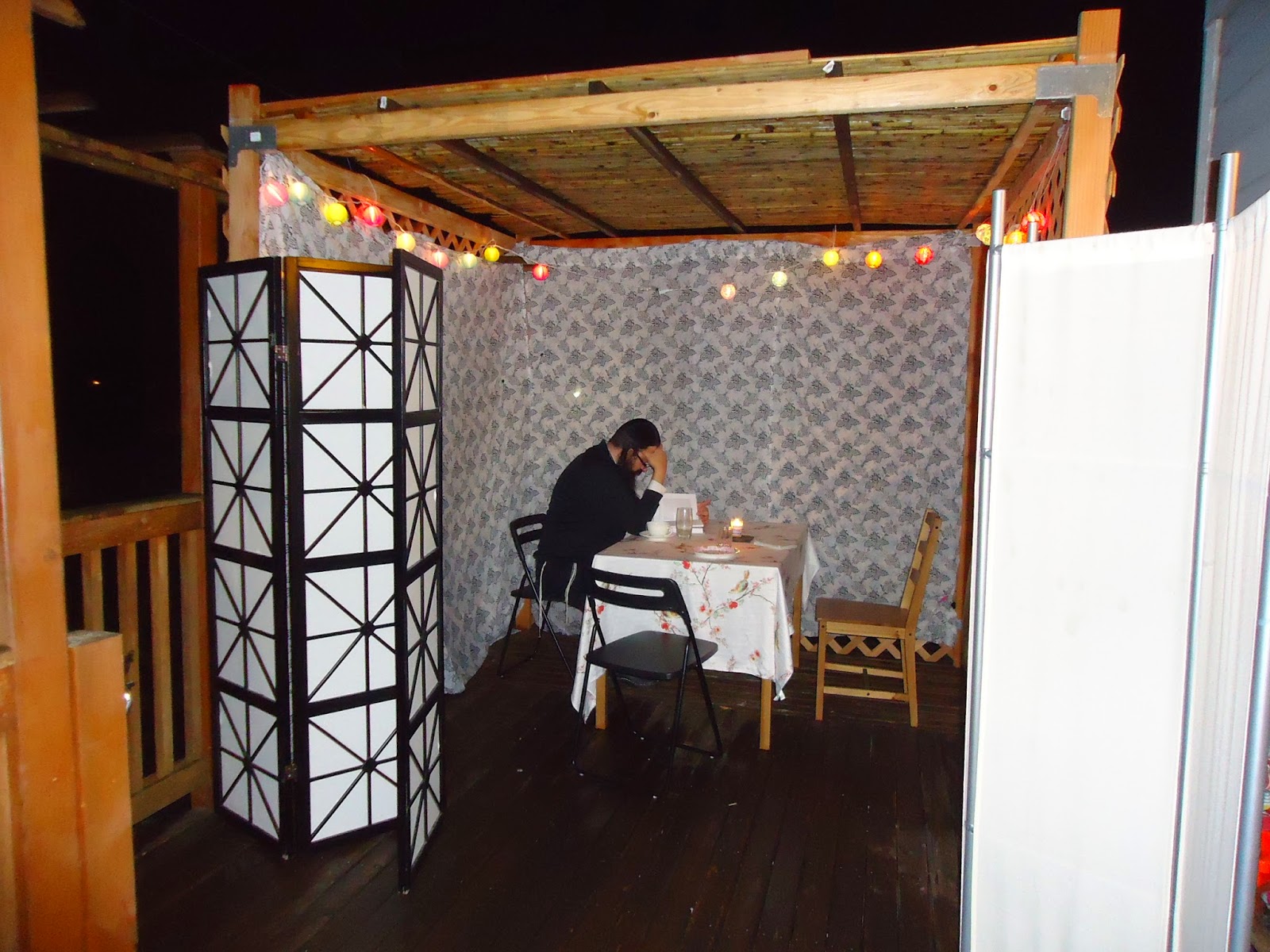 FYI: Those curtains were just for privacy. We had walls. In fact I was going to bike to Lowes and buy the 6 lattice panels we needed. I even asked my Facebook bike friends for advice. For one it was doable but I had the baby and he is cranky and that is life with a baby. So, Mr. Peyos got them. We were in charge of the tropical lights and the curtains. Those panels were borrowed from the now functioning mechizta gemach. Yes, it is a real thing.

Here is a daytime picture for you. You see the lattice behind the curtain. We could certainly fit more people in there which was nice. We had some holy guest sit in there with us. The baby came out in his snow suit at night because well babies like cozy right. I am sure everyone envied his coziness. 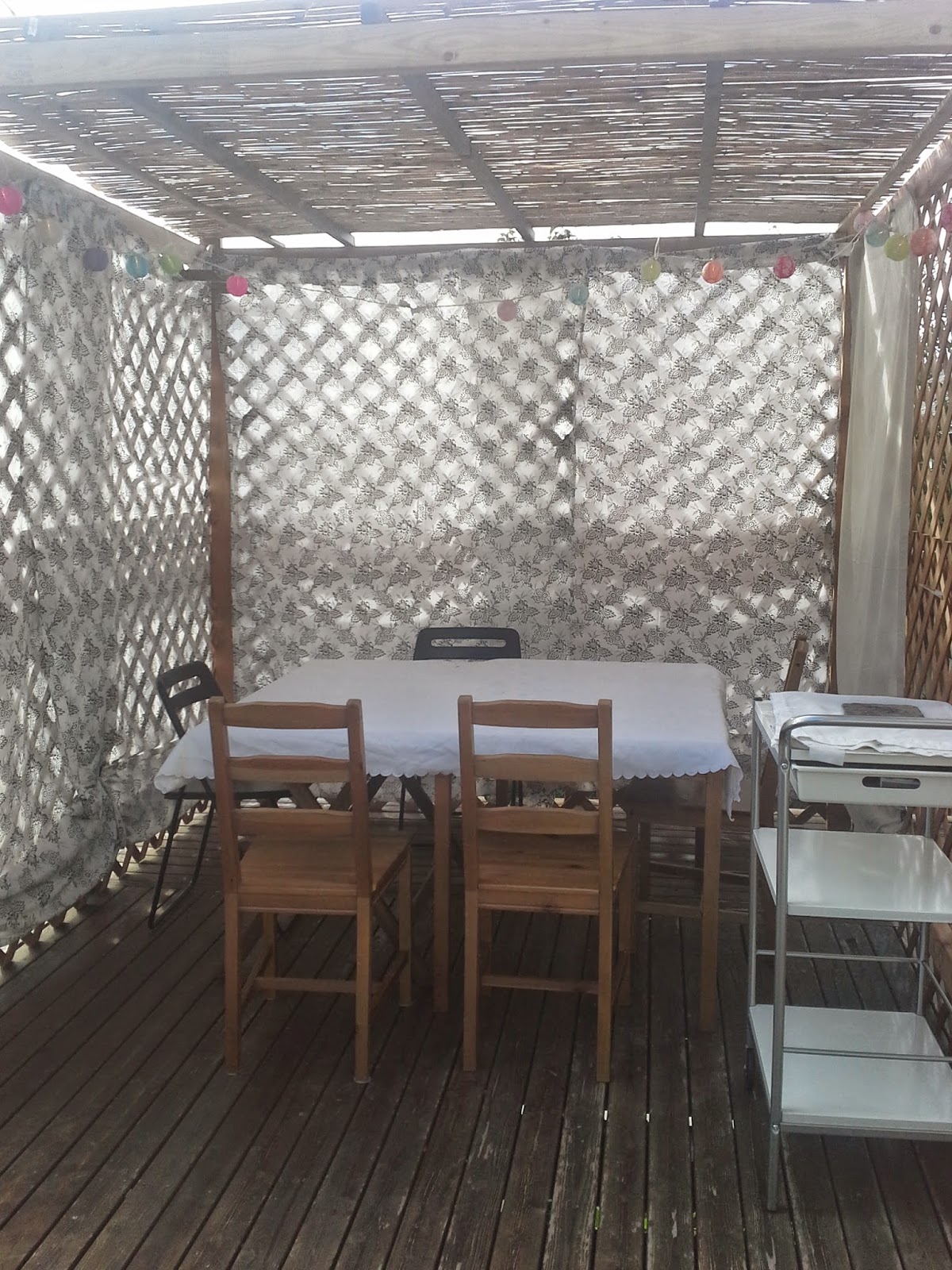 I did have sukkah envy. Those crafty Lubavitchers had a sukkah bike! NO WAY! Okay, not big enough to put a table in but enough shake your lulav and etrog.


We wished we could have seen this live but alas we are in Seattle and nobody has taken it upon themselves to schlep that set-up around. Currently I am plotting a whole Chanukah ride with giant menorah. I might have a source.

I did shop by bike before the chagim and we bought lots of food for the many meals. The baby is bigger and we are so close to biking with him. We are conditioning him to love the bike but the again that's all he knows. Car, what car? He is long person, I wonder where he gets it from? Probably that HUGE guy I married. In fact, the daughter I love is now taller than my mother, oy! She has yet to reach my height. The other day I put him in the car seat for fun and he look squooshed. Less than 3 more months and we are all zoom zooming on the bike!!

I am guessing in the next months we will be out discussing our next plan for making him his place on his throne on the bike. I see helmet fitting in our next adventure.

Mercer Island at Night or A great place to get murdered


We ran out of cheese and panic set in around the house. This meant that Baby Peyos was left with Mr. Peyos at home while I raced across the I-90 to fulfill our need for cheesy goodness. I waited until the last possible moment when it is questionable if you need bike lights or not. I made my way across the lovely I-90 bridge and based on all our other adventures you know that I am required to make this trip because other people have vertigo. The bike ride to the island was uneventful and I mostly encountered people who were commuting. Not one person with a spandex wedge, sigh.

I bought my load of lots of beer, cheese, gefilte fish and other stuff and made my way home. What happened? Someone turned off the lights! It was so dark. The park on the island has zero lights. As bright as my lights are, they don't light up everything. It is so interesting how many people walk on the path alone in the dark. Why? Who are you? I had no time to do a full out interview. How dark was it? Close your eyes. That is now dark it was.

I wasn't even Burke Gilman dark, it was close your eyes and hope you don't fall into Lake Washington dark. Let's compare.

This is Burke Gilman dark, scary but not this dark.

So many interesting people were walking alone along the Mercer Island paths. In my head I could hear the music for Dateline and visualizing the newspaper article, "mysterious cargo bike found with cheese and beer, mother missing". I think I watched too many episodes of Dateline murder cases that happened to be in Washington state. Why are all the crazy people from here? I read about the Green River murders and then I moved to Washington and thought, "NO WAY am I biking there alone!" So, my fear was a fantasy I created. I did bike by lots of strange people though, just kinda walking in the dark. One guy had a flashlight and flashed it in my face. Hi there. After carefully wisking myself through the dark to the bridge did I feel confident enough to stop to take a picture. I forgot my other camera which hangs at my neck. I was required to stop and shoot. 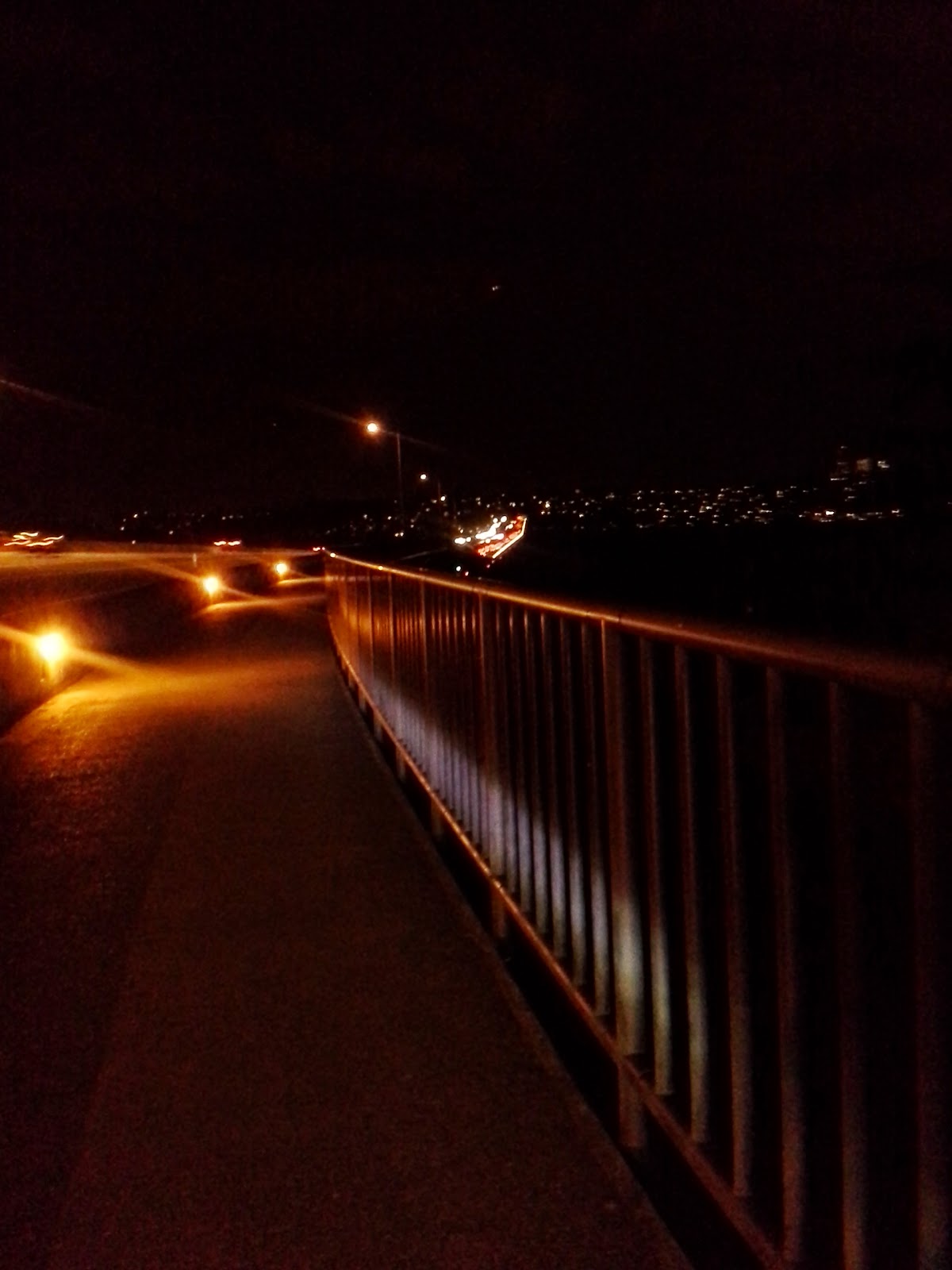 This is what the pedestrian bike bridge looks like at night. It looks pretty right! This was the easy part. Nobody biked towards me or passed me. Once I reached Seattle I had to make a real safety decision, bike through a not so nice crime area, the kind of place where I might get shot in the butt. Yes, I said shot in the butt. It so happens that the crimals with guns are not going to the gun range and fine crafting their shooting skills so most people just get a butt bullet. I decided that Lake Washington was faster and not butt bullets.

The weird part about biking in the dark in fall is coming past all those leaves. Once they woosh past you it sounds like someone is on your tail. I did many second looks behind me just to see if someone was drafting or behind me. 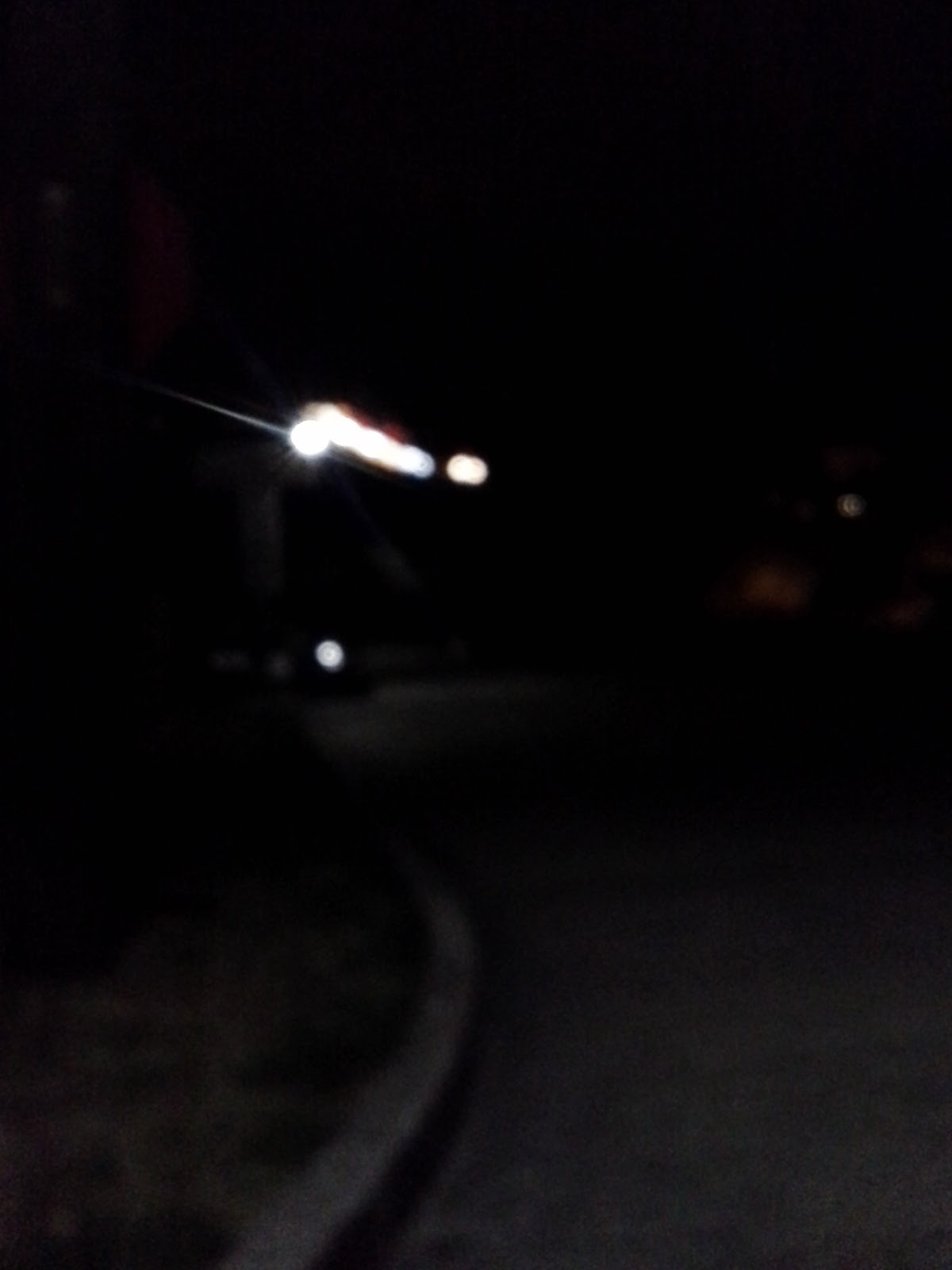 This is what the other side of the bridge looks like once you are in Seattle. See those lights? That is Mercer Island.

Lake Washington wasn't that bad but I didn't realize that I had less lights on the back of the bike. Once spring hit I took lights off because I would be riding in more daylight.  I made my way up the monster hill and down into Lake Washington carefully. The rest of the bike ride was just me. It is kinda crazy to think that at 8pm the street is still ad nobody is around. 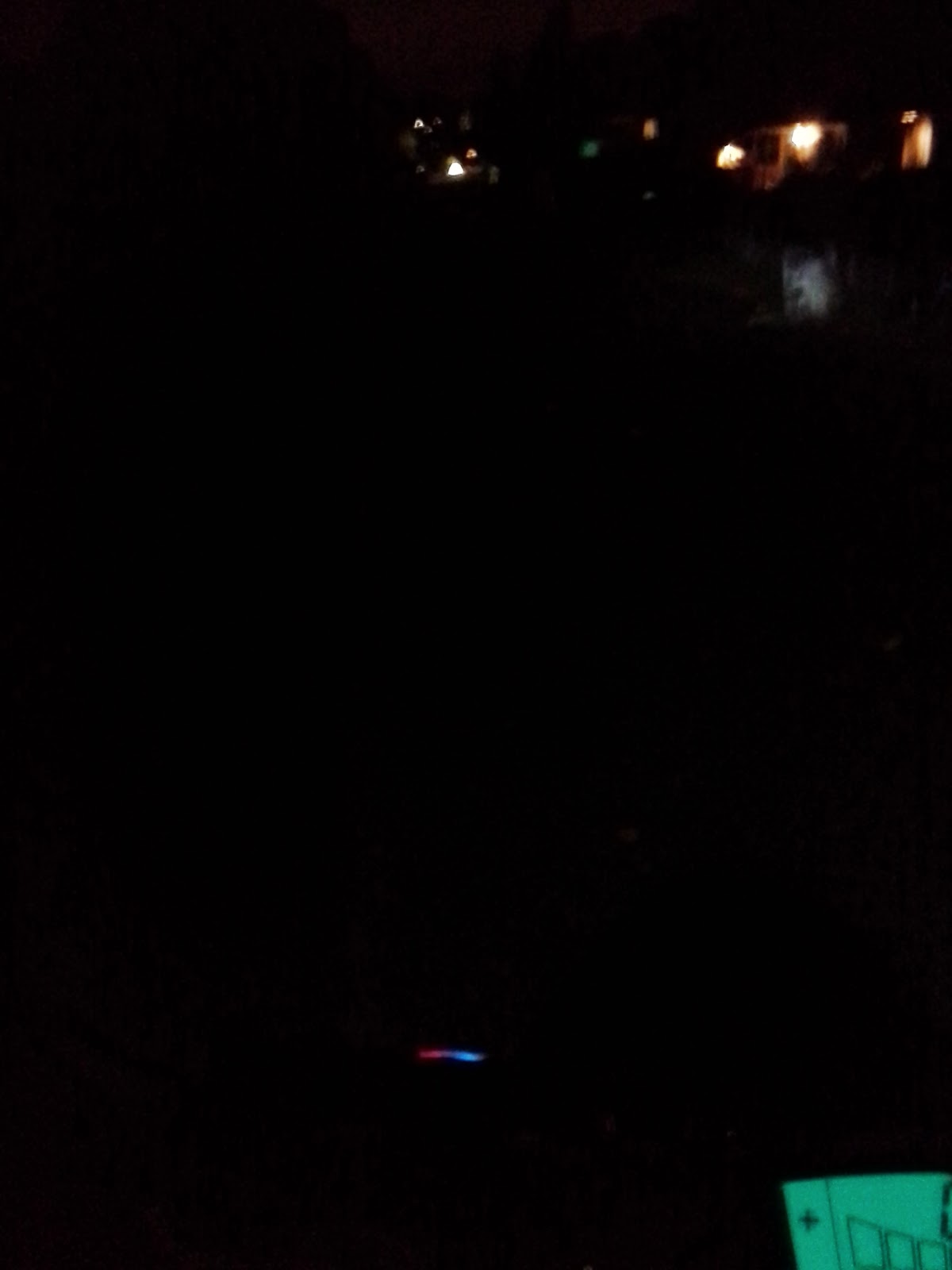 This is me coming out of Lake Washington on to a street with people and not million dollar houses. Still pretty dark, right! The rest of the ride was dullsville but I made it home to feed the baby and go to sleep.  We have 3 more months until the baby is bikable and everyone will be happier when we reach that point.
at October 06, 2014 No comments: