The baby went to his first bike show. Maybe this isn't the first if you count him in my tummy last year. The plan was for the whole family to bike but we had an unexpected event. Mr. Peyos had to go away on business and so we imported my non-biking mother while he was gone and for when he returned. At first the plan was for me and Baby Peyos to bike to Century Link and meet up with my mom and daughter who were going to drive. I know, shocking. Instead plans got modified and I left the house alone on the bike and everyone else went in the car, including the car hating baby.

I got a chance to bike on the Beacon Hill Greenway. You know what, it's nice. For some reason it seems that the speed humps were improved and made more frequent. While biking I honestly thought this would be a good place to bring the older kid to bike. 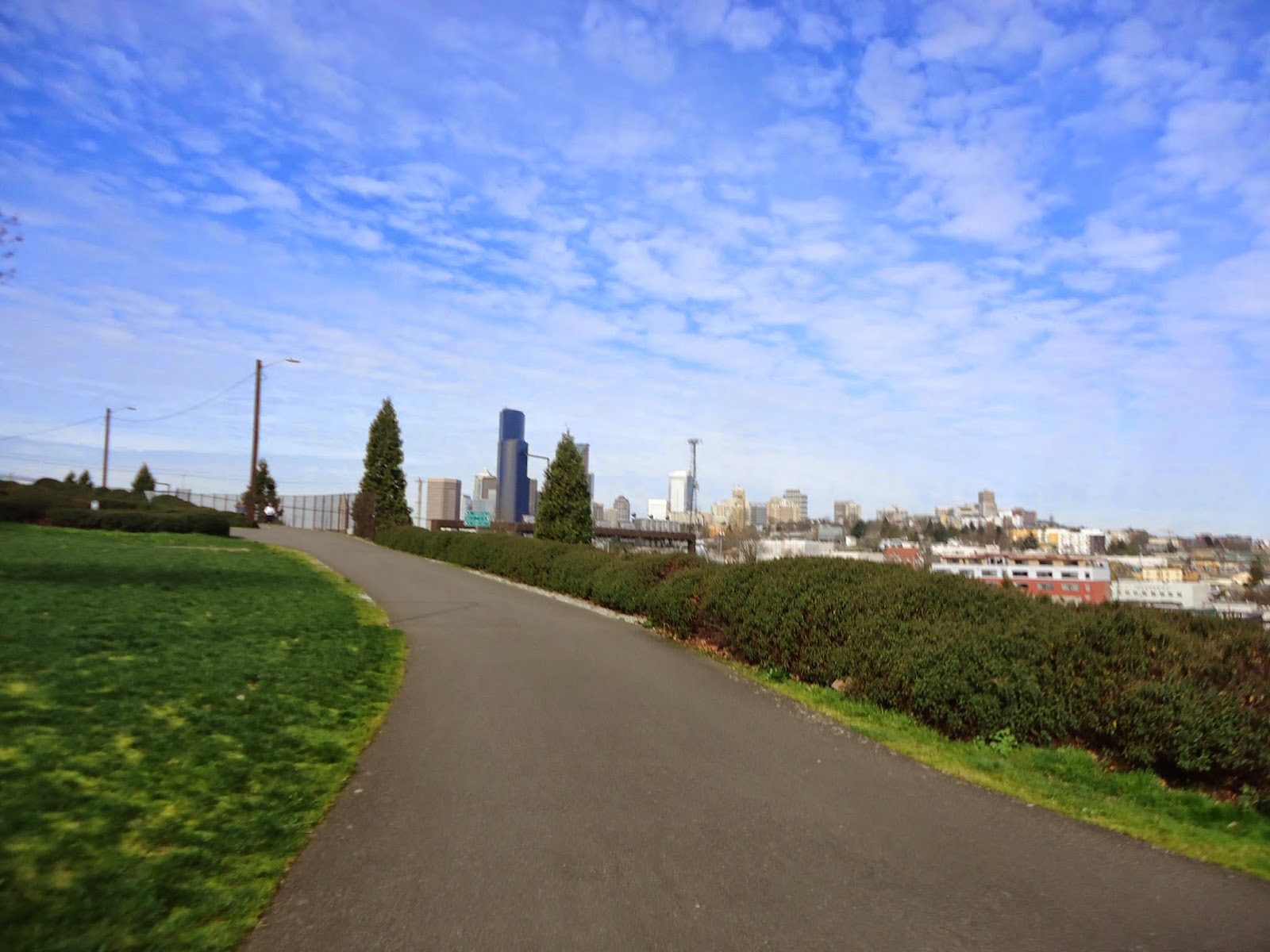 The day was beautiful. I couldn't have asked for a nicer ride. Look at downtown!

Guess what, who won that race? I did! I waited a long time for them to show up. I actually regretted not bringing the baby but he got to ride home with me so it wasn't too bad. 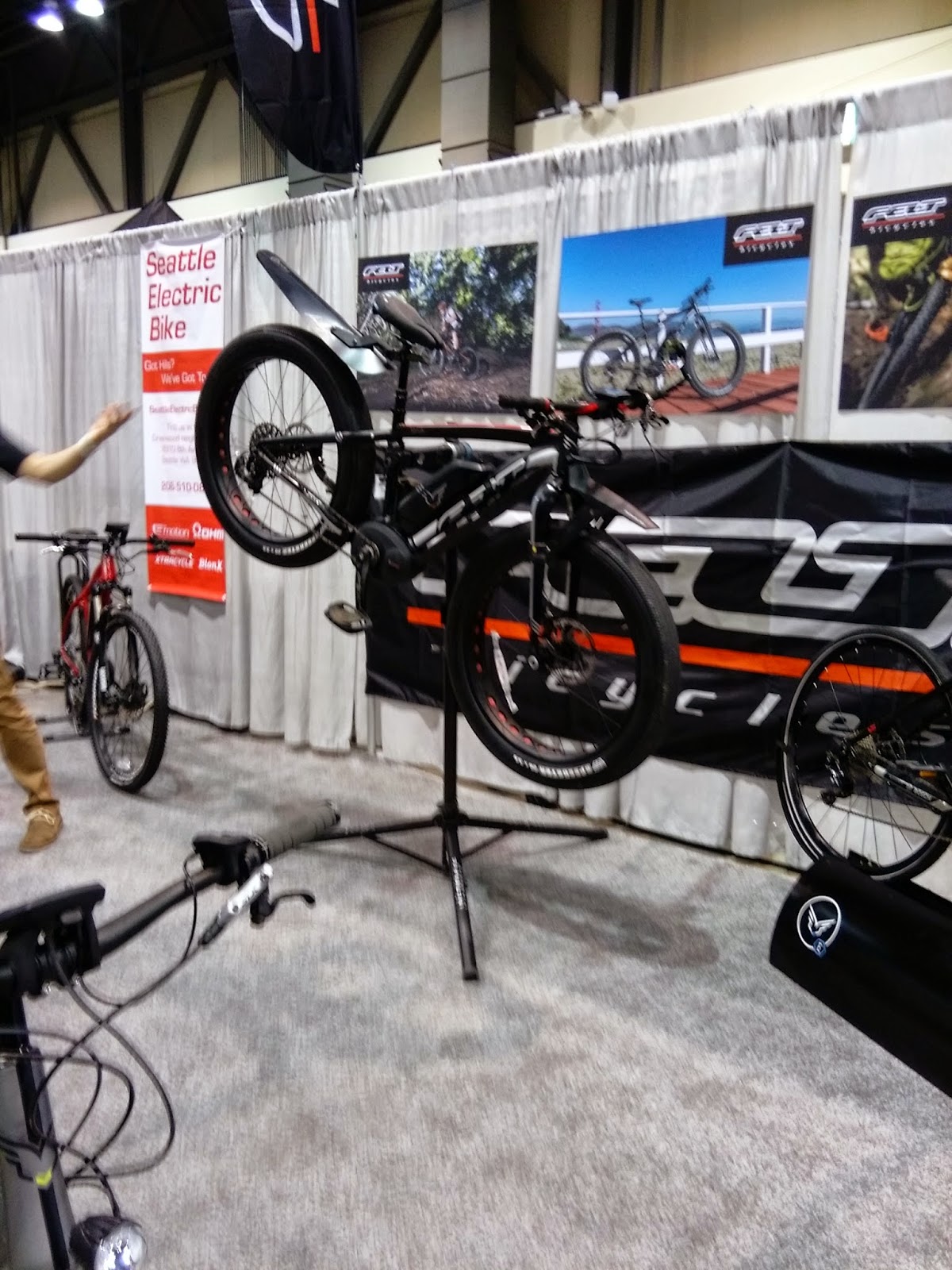 How was the Bike Show? I have to admit, it was kinda small but interesting how it was mixed in with the Golf and travel show. I noticed a lot of electric bikes. Here is a fat electric bike. It's so fat, I love it. 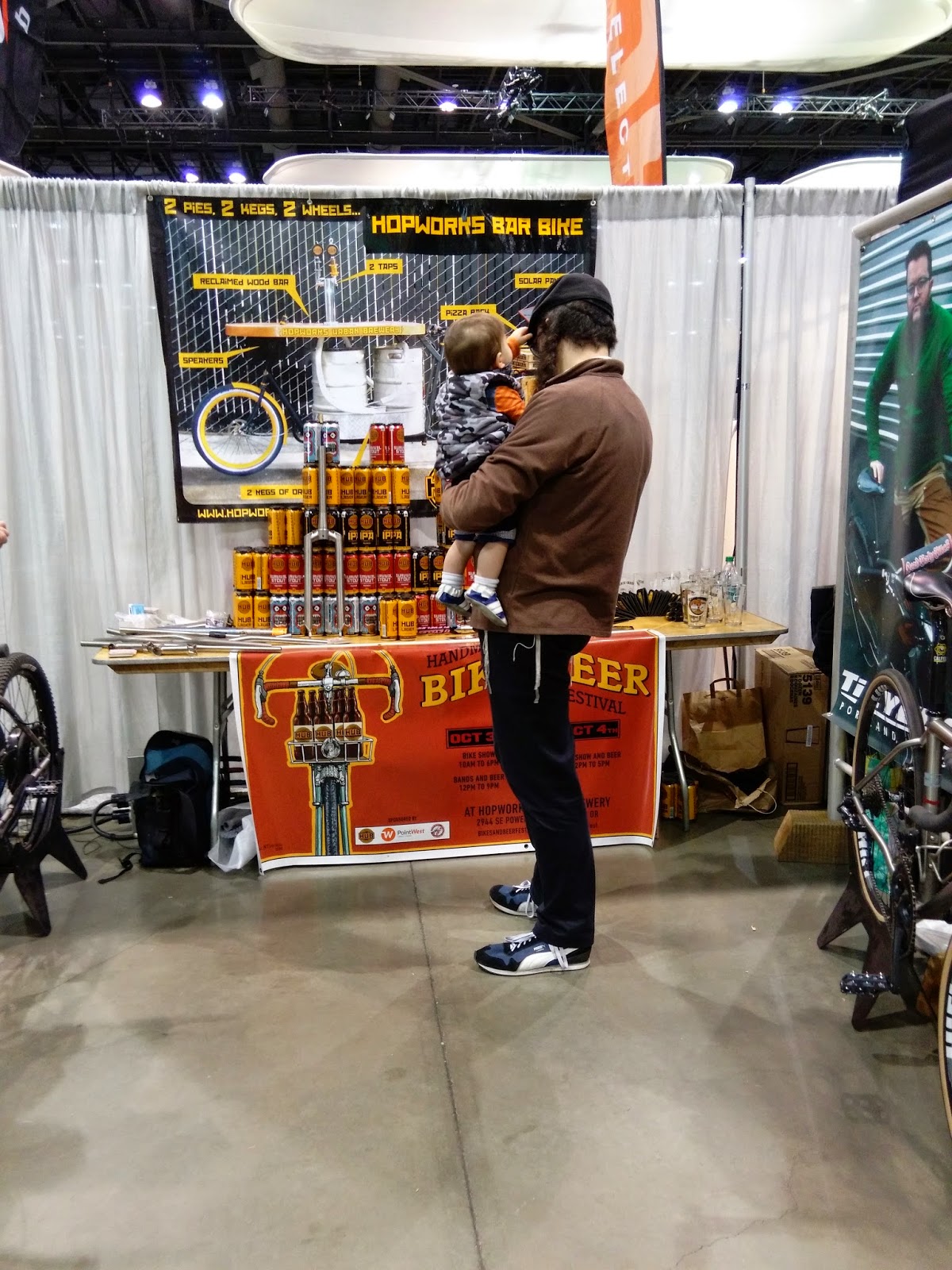 Portland was really representing at the show. Of course, Mr. Peyos gravitated to beer. Here he is checking out Hopworks. 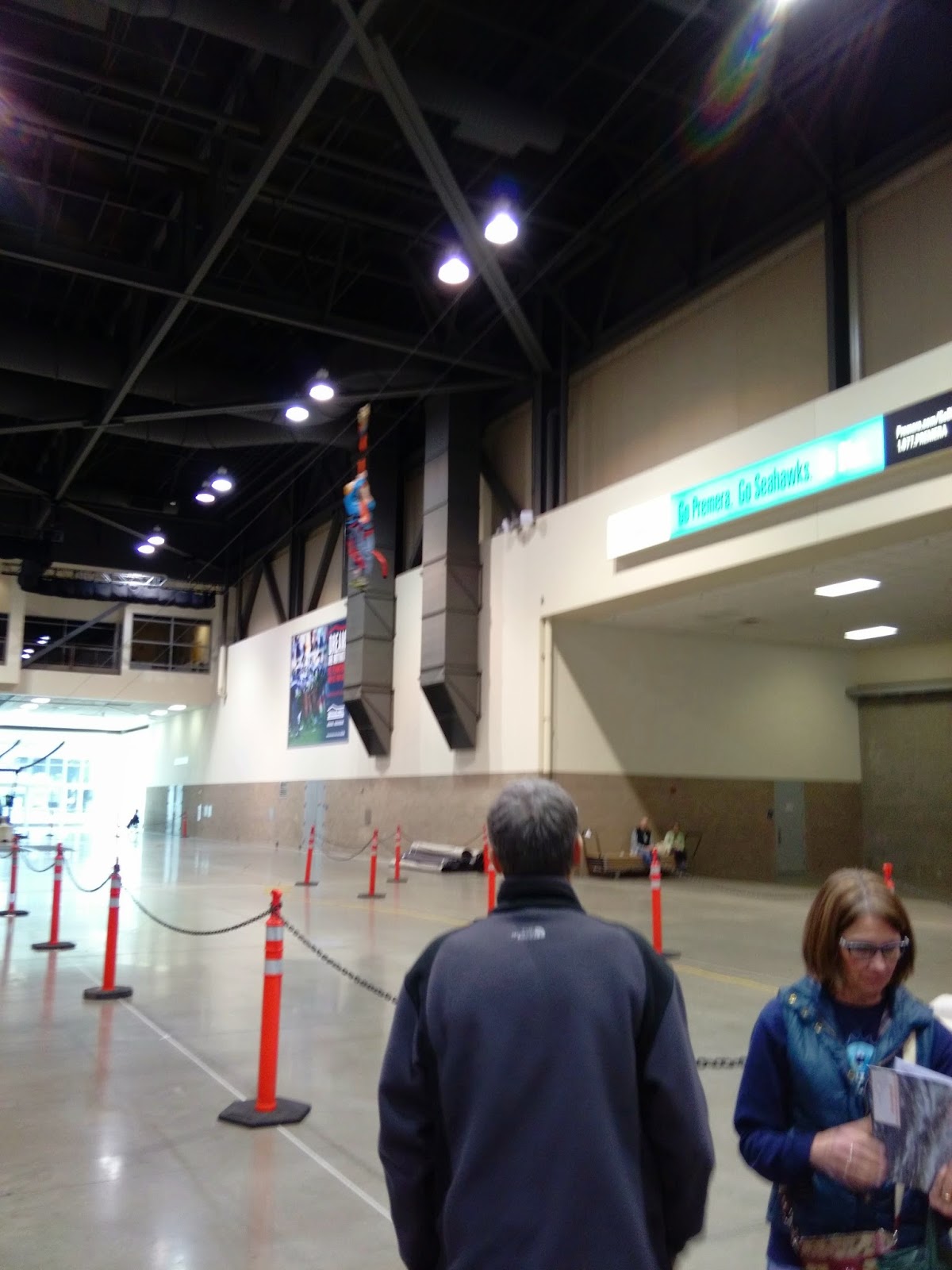 My mother wanted to try the zip line but didn't do it. Awww, I really would have loved that in a picture for my memory wall. Instead she had to be satisfied waving to Madi at her booth. 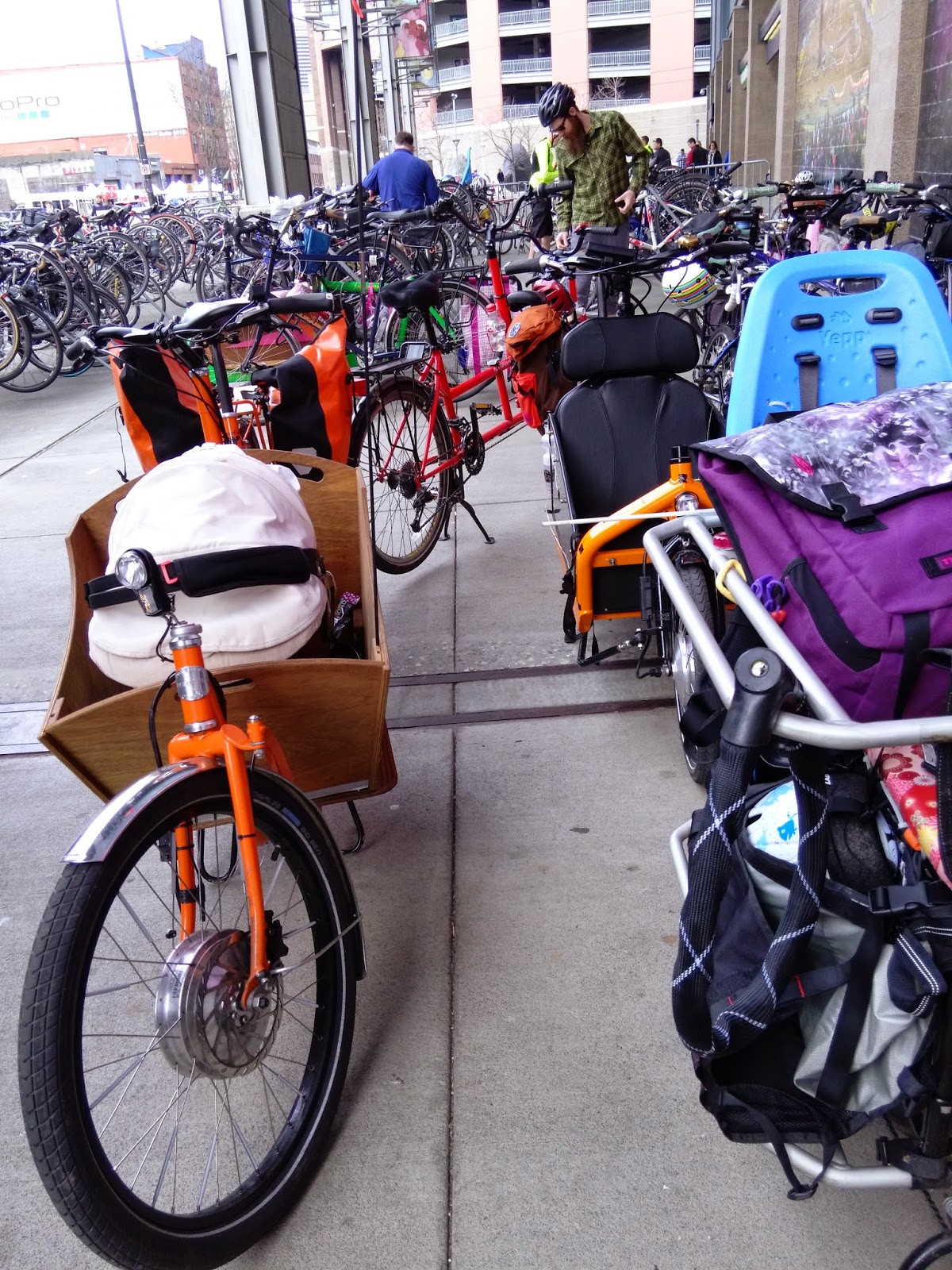 That was the extent of what was going on inside. Here is the bike parking when I came out. I wasn't blocked in but for fun I picked up the orange bike to see how heavy it was. The Metrofiets was light. I think I drool every time I see one online but seeing it in person is like, "ooooh, me WANT!" 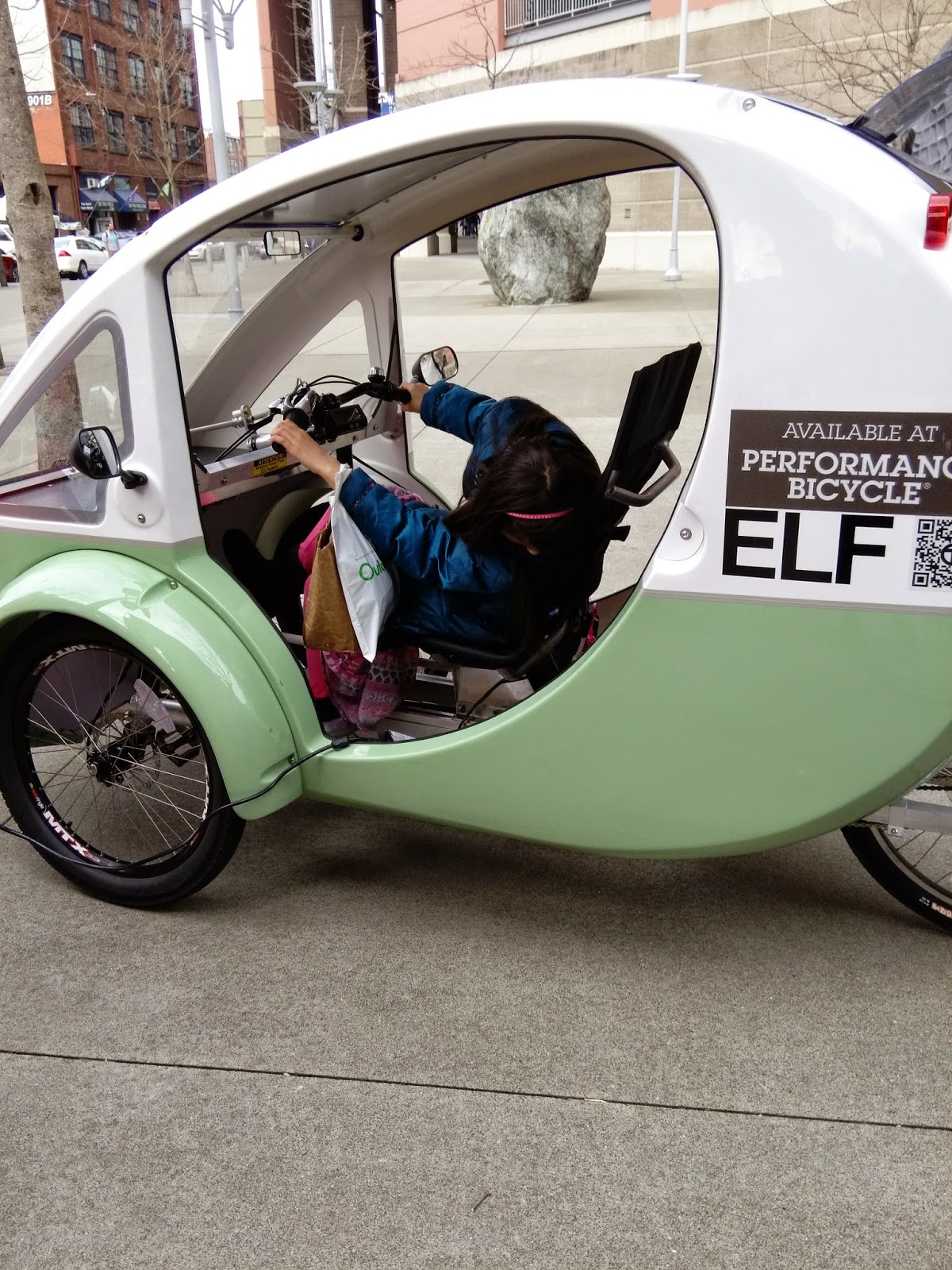 For the grand finale my mom and kid got to sit in the ELF. I asked to take it for a ride but it needed to be charged. One of these days I will make it up north to take it for a spin. I am sure if these show up all over Seattle we will have a new level of bike commuters. It turns out that now the back luggage area can be fitted to accommodate two kids as long as the passenger load does not exceed 300lbs. This bike is really cool and controversial at the same time. 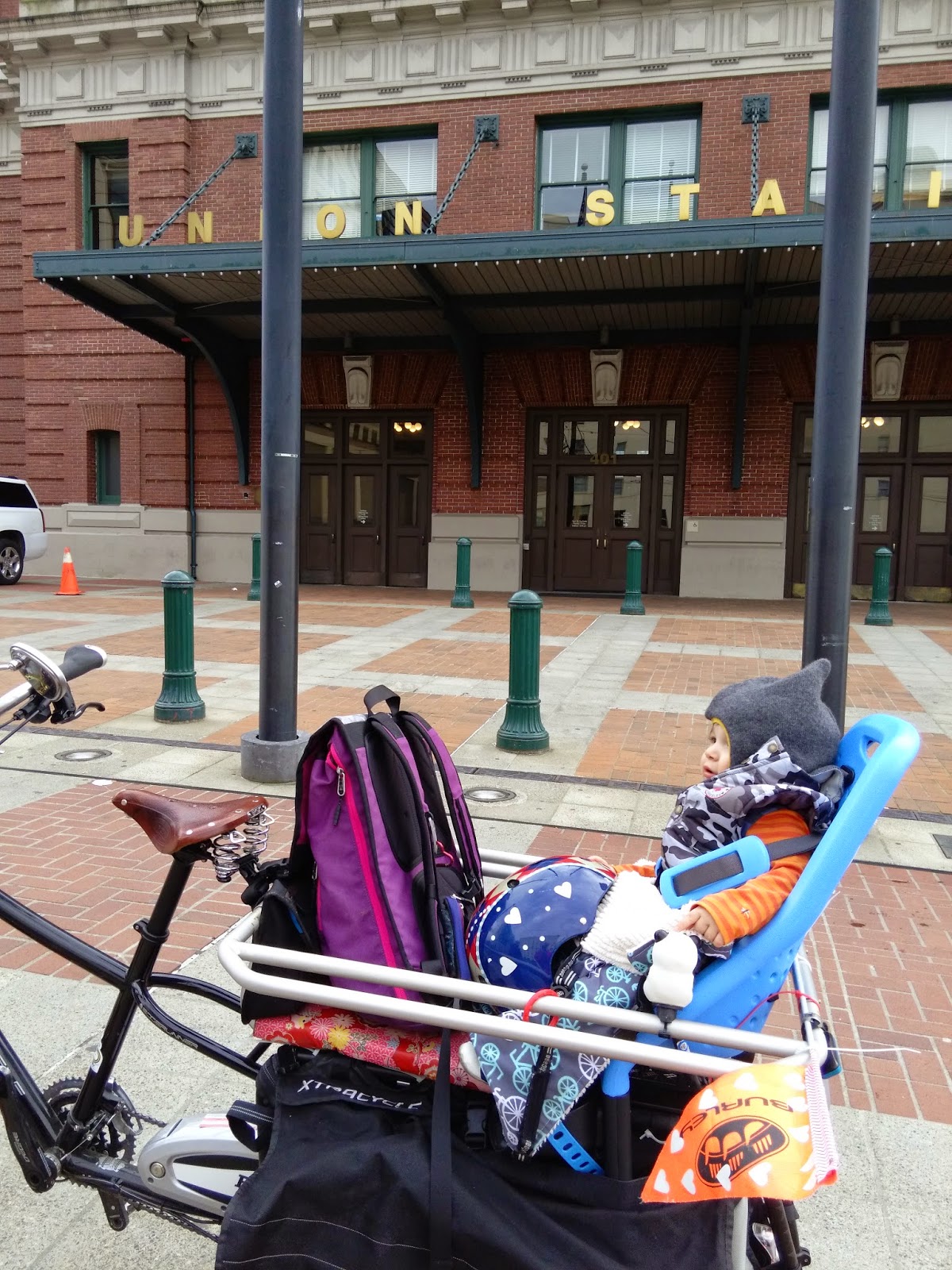 The baby was upset he wasn't with me so I stuck him on the bike and we raced the car people home. Again, who won? We did!! I am not sure if we will go next year but maybe it will offer more, clowns, balloons, banana grams,
at March 01, 2015