May is Bike Everywhere Month

Just like in years past, except last year, I joined the May Bike Challenge. As part of the emerging Seattle family bike community I now have people who will join a team with me. It's amazing!! In many ways this is motivating for me. I have been in a bike slump. Getting out of the house with two kids has proven challenging. The ever changing mood of a tween combined with the unpredictable nature of a 1 year old who walks, runs, states opinion, and then goes boneless is very challenging. So, I have limited my rides with both children for the most part.

So, I made a team. Here is our logo. Our motto: Family biking is all about unicorns and rainbows 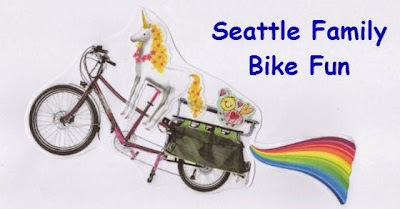 Yes, it is cut and paste because sitting in front of the computer and cropping the bike, unicorn and rainbow was just too much sitting in front of the computer. I can't!! You can keep tabs and see our progress. I'm just saying, family biking is killing it this year. Out of 1,853 teams we are in the top 10.
So far I am happy with my biking. I have managed to average my old weekly average of 100 miles a week. This is with both kids aboard, which I love.

What have we done in May? Let me show you:

We kicked of the Month by biking downtown. I used my  Oma bike and the older kid road her bike on the protected bike lane on 2nd Ave. 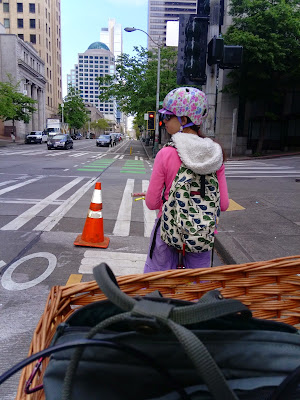 She looks so cool. This was her second time. We did this before. Her first time is here. She alone and I was biting my nails the whole time. She handled the road like a pro. 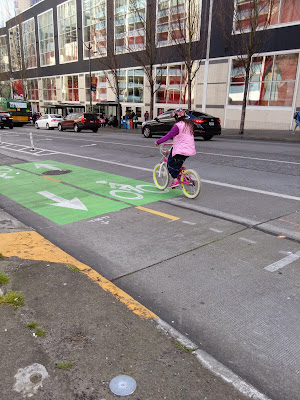 I biked to Wallingford to buy plants because I'm insane and love the Seattle Tilth's plant sale. 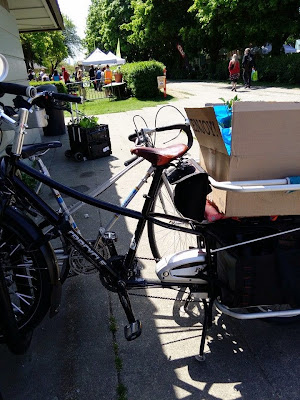 We biked to the mythical town of Georgetown to  Costco for cheese. Here we are going down a major road. As hard as it is to believe that road actually has a sharrow on it. Seriously, I want to know if cars will actually slow for anyone who is not in a car. We are on the sidewalk. I hate the sidewalk. 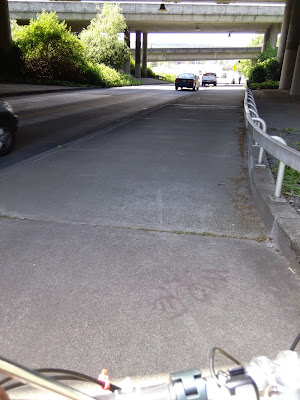 Costco has bike parking. It's not horrible but I am the space hog cargo bike. Lots of bikes were locked with cable locks. Stop doing that! You are killing me when I see your nice Rodriguez bike ready to be stolen. 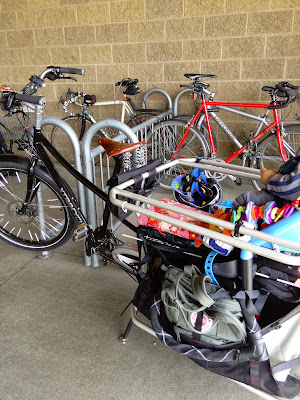 We did one day of fifty thousand errands. This one required we eat kosher gourmet cake. YUM! 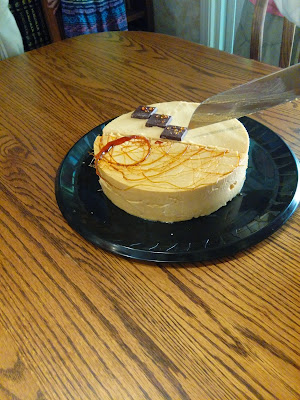 I got a lot of exercise. What hills behind me?

We biked into a storm with thunder. ACK!! The baby loved it and the older kid thought we were going to die. The guy biking in front of us just told us to bike faster, hahahaha. 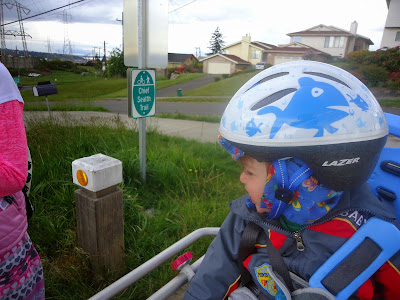 We did more too but when I forget to put the camera on the lanyard around my neck I don't take pictures. I need a video camera permanently mounted on my helmet. Soon, I hope. The last trip, so far, was to participate in a group ride for Seattle CycloFemmee 2015. All three willing south Seattle bike families made the trek through Mt. Baker, up to Capitol Hill down to Lake Union. It was nice and slow. My daughter and I went on this ride while the baby stayed at home with Mr. Payos. We had fun. So far we have managed to get out of the house and save me from feeling like I don't bike.
Stuff we spotted in nature. A metal pig, oooh la la...