The shady side of the Yepp

Seattle gets two weeks of sun tops. Okay, sometimes it's more. The other day I went on a Kiddical Mass ride with the Seattle Southenders to Madrona beach. It was a whooping 4 cargo bikes. That's fine. We had a good time and a good laugh once we got to the beach. The baby threw 2 apples and had the best time. He also insisted that he drink someone's soda. A lot of "I want". Don't worry, nobody gave him soda. After the long ride I realized I needed to do something about maximizing shade for Baby Peyos. I don't need him angry because the sun is on him.

A long time ago I read the most inventive way to get a baby stroller canopy on to the bike seat. You Ain't Got Jack was the first place I read and learned about it. This was later duplicated by our very famous Madi in the saga of the Unappreciated rain shield. Remember when they were so little and not able to kick you?

So, I needed to attempt this. Well it took forever. In my postpartum non-biking I bought something I didn't want, a stroller. Actually it wasn't that bad. I used it a lot. We walked and walked and walked and soon 9 month of non baby biking was over and we were on the bike again. I thought as soon as we transitioned I was going to made the rain/sun shade but busy life took over and we never did anything. Again, what need did I really have? It's Seattle. When it's warm, meaning 70F and up, everyone is naked. I don't think people own summer clothes.

This what we started out with. This is the MacLaren Triumph Stroller. Amazon tells me I purchased it December 10, 2014. Despite the current non use, we did use it a lot. I don't necessary endorse buying it if you just want the canopy. The rain/sun canopy detaches but it is not the best at protecting against sun head on. This stroller came with the rain guard so I look forward to trying that on a rainy day. 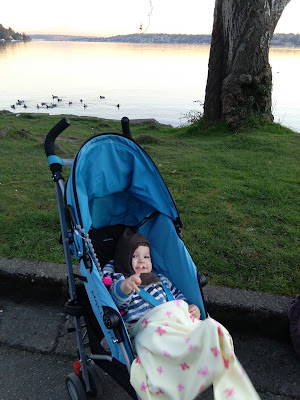 After detaching the canopy I took two bamboo poles that would fit the canopy slots. I put off buying the pvc pipes because I didn't want to venture into Lowes with two kids. No thank you! Do you like his balaclava? I don't see them on the website now, summer, but I bought it from Rebourne. When winter comes you will even want one. 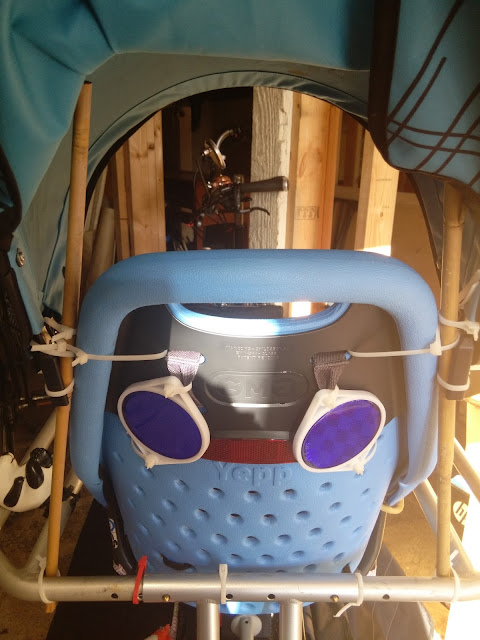 This is the view from behind. The tools required: 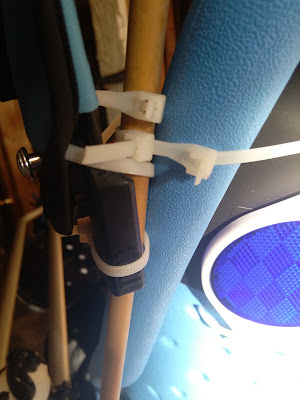 Not the most elegant job. Here is what's going on. See that metal screw, or what looks like a screw? I looped two separate zip ties above and below it. What you can't see is a space between the canopy fabric and the screw. The middle zip tie connects the bamboo pole to the Yepp. I didn't poke holes in anything. The first photo shows that I looped the zip tie through the slot for the harness. So far, I have no complaints from the rider.  The very bottom zip tie makes sure the bamboo pole stays in the canopy slot. It's a slot and I was lucky enough to have bamboo that fit it perfectly. 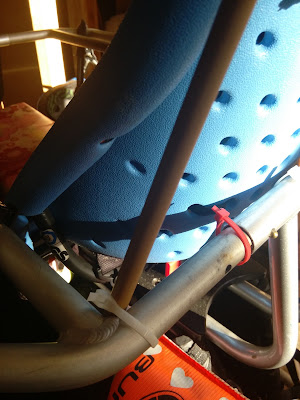 Finally, I zip tied the bamboo pole to the Hooptie. The Hooptie is the metal around the passenger part of the bike. 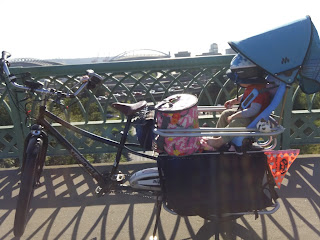 Our initial ride kept us close to home. In order to do a real test we went downtown to the gritty street of aggressive drivers and wind. Without fail it is always windy when I go downtown. As you can see. I pointed the canopy down. In the normal stroller position it is not like that but after many uses I find this the optimal position for maximum shade. You might have to fiddle around with what works best. I also think that by not using pvc I was able to modify the position much better and make the head/helmet clearance much higher. The wind did not make the canopy feel like a sail, an issue I thought might happen. I might have to bike across the I-90 to make sure. 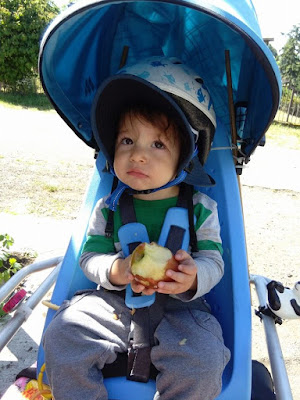 Here he is on our test run. I caught him in a moment of reflection. His favorite activity is eating apples. 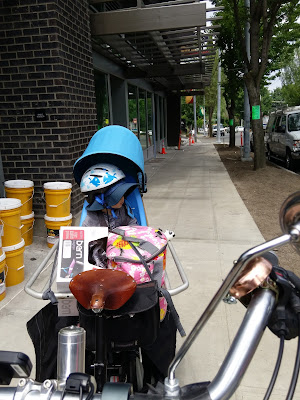 Working backwards, this was our test run. Here we are contemplating the new PCC bike parking. I hope they listen and make better bike parking. The bike parking right now in Seward Park is not very desirable. It is so squooshed between plants and carts. No bueno!

Did he like it? I didn't see a difference in his behavior. Instead, it gave me peace of mind. I don't like him sitting back there with full sun on him. The shade didn't prevent him from doing his favorite things, throwing and grabbing. Occasionally I will hear, "I grab it", mostly it's plants. 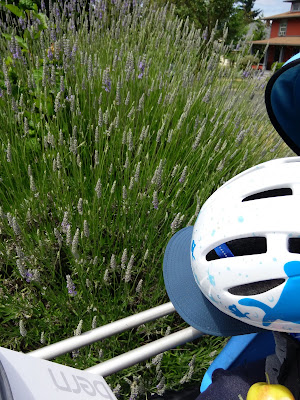 Here he is grabbing lavender. He loves sticking it next to his nose. Smells good right!

The other activity he can still do is throwing. The throwing mostly comes in the way of food. When he is done with the apple he usually just tosses it. We are trying to teach him to give it to us and not toss it. Most recently when we tested out the canopy he threw his graham crackers into the 2nd Ave protected bike lane and managed to hit a guy on a bike. That guy wasn't happy. Have you ever seen someone mad on a bike? Well, now I have. 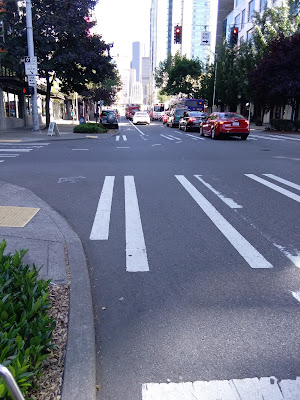 Here we are on our way to epic cookie throwing. Those poor drivers, you have no idea how much fun it is to be on a bike. It was an easy project. It took me about 20 minutes with Baby Peyos strapped into his seat.