If you follow me long enough, I have invested my time by going to the Rainier Avenue Corridor meetings. I brought my kids, went when I was tired. At one meeting I stood at the back with my kids and the baby, still small threw his apple at the mayor as he entered. This begins my career as an agitator right!

So, on July 30th SDOT finally came back to give the result of their fancy computer calculations. I was optimistic that finally we would get some change.

First, it was very hot in the building and for whatever reason the sound system was not set up properly. The only person with a voice the cranky people could hear was Bruce Harrell, bless him.

The meeting basically started with an overview of the project and reasons SDOT was taking safety seriously. It was a lot of information presented previously but it was necessary. Then a presentation of the "greenways" concept. Then their was a small presentation about Accessible Mt. Baker. This is an important component but at the first stages of planning. So, in essences, it was a tease.

Finally to the meat!

On Monday August 3rd SDOT will implement Phase 1. What does this mean? 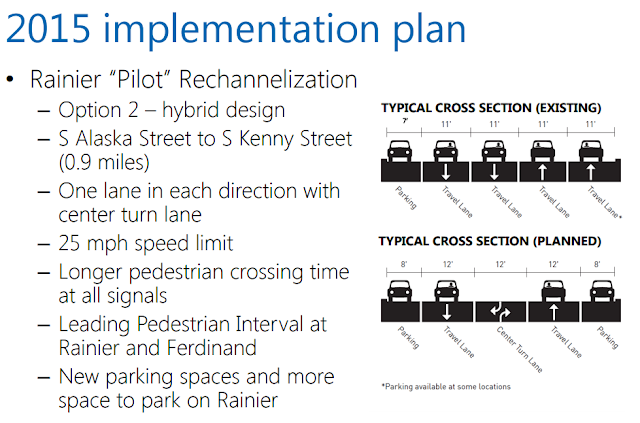 It's the hybrid design. How disappointing but I do like slower speed limit. As a matter of fact, I probably could do 25mph on my bike. Can you only imagine a whole bunch of people biking at 25mph and meeting lots of anger from drivers because we are going "too slow". Oh but we are going the speed limit. 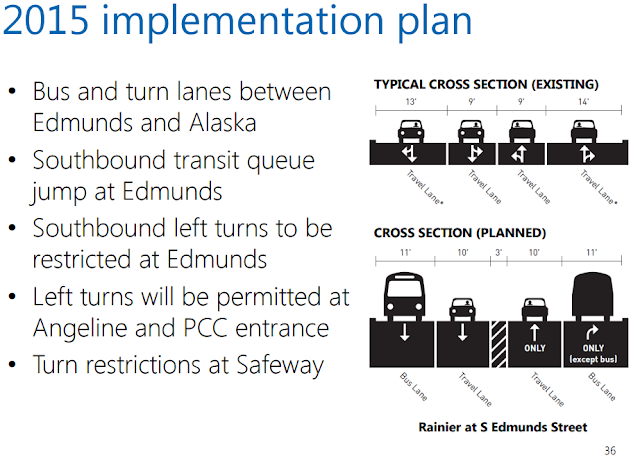 The turn restrictions are necessary. These are hot spots where building have been hit by drivers, people have been hit by drivers and drivers have hit other drivers. These crashes are caused by people's behavior and sadly it has to be changed by drastic measures. Cars aren't the problem, it's people who choose to drive in an unsafe manner. It also looks like enforcement will be working hard too.

With that presented I am still frustrated as this does a lot of curve driver behavior but what about everyone else. I know, these changes will help people on the Rainier Ave. sidewalks. When the meting was over I joined my women counterparts who live and bike down here in the Rainier Valley with our families. Somehow we managed to grab the complete attention of Scott Kubly who was basically held hostage. Maybe he felt like he was held hostage, hah! In the end Mr. Kubly suggested that the group of women were hostile. Having an opinion does not make a person angry or hostile. I have an awareness of my surroundings and could see the security guy behind him inching close. It also didn't help that one of us dropped a popsicle on him and then proceeded to clean it up with a clean diaper. The baby wipes were in my bike panniers. This conversation needs some follow up.

What I want @SDOT to know:

I feel marginalized. I am a person who does everything on a bike with her kids. That's how we live. When I cross the I-90 border to bike north I get more and more upset the better the infrastructure gets. By the time I get to the Burke Gilman I am pretty pissed off. As I bike north I also notice one thing and it is WHITE. Do people in the north end get nice things because they are white? It sure feels that way. I know, the north end isn't perfect but come on! I have to navigate weird street to avoid stuff like: violence, theft, hills, sidewalks with bulbs I can roll my bike across. I wish I could take the flattest most direct route. Let me see, what route would that be? Ok yeah, Rainier Ave. Well duh.

Don't characterize me like the guy you saw in the Admiral Way blowing the red light. I am not that spandex guy. I am also dealing with a different beast. It's called Rainier Ave. If you see me act in a certain way it's because drivers are WACKO and I have to bike in a defensive way. Stop giving me an ulcer every time I let the older kid ride her bike. She is 11, how long does she have to be on my bike for safety? She loves biking north but it requires we do a whole bunch of backwards routes to get to the nice stuff.

Also, just because I like to wear my Greenways t-shirt doesn't mean I give every project a cheerful yeah, seriously.

Not too long ago I helped a visiting family from Turlock navigate their way from downtown Union Station to the Columbia City. You know what, we had some crying kids on the Beacon Hill Greenway. The hills were unexpected even with seasoned urban riders. My older kid was encouraging and helpful by walking with the other kid and reassuring him that it's not him it is the hill. We had to loop up to Beacon Hill and down Columbian Way just to safely get to Columbia City. Can most adult do this route? Probably not, they would die with the hill coming out of the International District and half pass out on the Jose Rizal Bridge. Why did I take them on this route? I did it because Rainier Ave is A HORRIBLE PLACE for anyone outside a metal machine. I was concerned about their safety. This meant that we had to huff up a hill for the sake of safety!

With that said, I am so discouraged and saddened. I don't know what to think. The road changes are good. As you can see, the changes were happening. In the end, this just means the same for me, same backwards roads to get where I need to get. @SDOT, I invite you to experience my world for a week, maybe you will reconsider.
at July 31, 2015 No comments: