I know, it's late notice but this Sunday is a Kidical Mass ride. I will be meeting everyone at the grassy playfield at Jimi Hendrix Park and we will make our way down through Coleman Park to Bicycle Sunday. Whoopie! At the end we can hang out and bonus try out some of the rental fleet of Familybike.org.

I will try to tweet but find it incredibly hard since I like to talk, blah blah blah.

Here is the link to the Facebook event page just in case.

Again, you don't have to have kids to join us on this ride. We welcome people without children as well.

Your exit strategy: How will you get home?

Once we reach our destination along Lake Washington Bicycle Sunday I can direct you to several routes back to either our meeting spot or a good route to get on Link Light Rail. 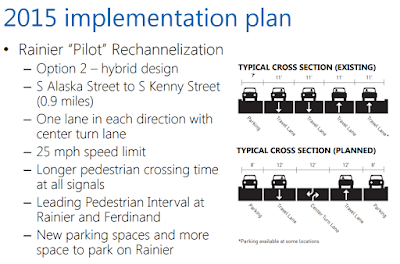 We are getting close to our one year 0.9 road diet anniversary and what has been accomplished to support it? Read those words, SUPPORT it. Here's are the results of how it's working and I can't wait until it extends to where I live.

Look, I tried to get myself in there by saying, "look, let's get a protected bike lane there, while we're at it". It was not even my idea. SDOT presented it as one of the options at the early road diet meeting that I attending with my tried an cranky kids. Remember that! PLAN 1B.  It's like birth control for the road.

So, what happened to the protected bike lane? In essence, early in the year I was told that it was not the right time and that the idea as not being shoved away but that their were other things that made it difficult to happen at this time. Does that sound familiar? I'll give you a hint: CITY CENTER NETWORK.

I had a hard time writing about this after the final meeting because I was pretty enraged by some people and their attitude. I think their are people who are afraid of change, despite wanting safety, and will do anything to stop that process. They will give it names and in the end say that "community" was not involved.

Oh, you want to talk COMMUNITY. Then let's talk about the E-W Rainier Valley Greenway that runs directly through the Jewish Orthodox Community. The COMMUNITY was not involved. I am pretty sure the audit rides were held on Saturday, our holy rest day of Shabbat. Shabbos, we all WALK along the greenway. Why not ask us? Nobody reached out and it looks like with a review it might just be that way again. At this point, a large chunk of the community has no idea what a greenway does because aside from added speed humps what's the purpose? So, whoever said, "Greenways" is a household name is so wrong. When I explain that greenway to people it's always followed by looks of bewilderment, especially the part where I say it's All-Ages-Abilities. That one usually bring us tears of laughter.

Down here we are waiting on Accessible Mt. Baker, Bus Ride Transit and the next installation of the road diet.  I would have hoped for a pilot project but that was too much to ask and frankly was discouraged from people I thought were into road safety. You suck! I know, feeling a bit of rage.

At one point someone told me to get off Rainier and go ride on Lake Washington. The places I need are not along that route and what do I do about the older kid who rides on her own? I'll just ride on a road that is 30mph and is frequently used as a speedway for those of you who refuse to use Martin Luther King? On my own, I have had people drive unsafely past us and then the complaints on Facebook about how bicyclist HOG the road. Lake Washington has beautiful and scenic views, why are we allowing people to use it as a speedway? Why is it 30mph. Reduce the speed limit to 20mph. This is a street for people to enjoy nature not race through.

LWB should NOT be your fast car cut through.Passing me when I'm going 25mph like this is WRONG! pic.twitter.com/C3jrHa7YQz
— No Spandex Required (@NoSpandexReq) June 23, 2016


I decided to fix a broken camera and invest in more cameras so I look like a biking surveillance so I can have video proof. It's not in my head. I have a front camera and a rear one. Then to make matters worse I have a point and click camera suspended on a lanyard around my neck. Is that enough? Nope.

Watch this. We're on the sidewalk. Yes, the sidewalk because Rainier Ave is the flattest way to get to where we needed to go which was ON Rainier Ave. If you want me to patronize businesses on that street then this is how I have to get there.


What was the outcome? Well, this is a dangerous intersection. Several drivers have managed to collide into that building on the corner. A nice juicy curb bulb would have prevented this but one of the responses was, "DON'T TAKE AWAY PARKING!" Wow, really, cars over people. Nothing has changed. If you listen you can hear me reading the speed of drivers on the flashing board.

Next, how about the side streets where the safety burro told me to bike.


It was too much to drive slowly around us on a residential street. I hope something poops in your car and you never find it and are forced to drive around with that aroma.

Then we have this wonderful times when it is ideal to cross a street because all drivers are stopped for me. I do appreciate it but then you have that one idiot.

Then this one. I would like to shop in Rainier Beach this section was improved. In fact, right after this happened I met an ex-member from the Seattle Pedestrian Advisory Board. We had an interesting chat.


It gets better. I get to watch a pedestrian try to get across. Don't tell me you plan to add more paint "community" (I'm talking about the cultural crosswalks) features here because I don't think it's going to change the attitude of drivers. Basically, you could care less. Maybe if one of your family members gets hit them you might take an interest in safety. Maybe a car will drive at you when you are on the sidewalk and you will care for a little but then you will go back to your car advocacy way. I don't know.

In the meantime. I will keep recording, capturing all these moments on video. What will the car advocacy people do, well they will go to Rainier Ave businesses and scare them in thinking that protected bike lanes will ruin their businesses. No joke, somebody did this.

Rainier Ave Businesses, I challenge you. I can shop mean and hard like a car honk honk. Don't let that burro think that change will be bad for you because look what happened to the bookstore that didn't get the foot traffic he needed. He had to close. He knew foot traffic was key and sadly it didn't happen because people didn't want to walk there for safety reasons. People in cars are not the ones holding the key to increase businesses. So, get that out of your head and don't listen to that burro.


Rainier Valley businesses, it's BS if you think bike infrastructure will hurt your shop. $250 right there #SEAbikes pic.twitter.com/Qy2GJBfNBx
— No Spandex Required (@NoSpandexReq) April 22, 2016