I am a fan of not spending money on crafts. I am not a crafts person. So this called for some creativity. In a last minute effort I thought, hey, let's have a Mini Me DRT (Disaster Relief Trials). I have always wanted to have one and thought combing it with a Kidical Mass Ride would be a great thing.

So, I put the tween in charge of the stations. She came up with these ideas:

Our stops:
-Save a puppy
-Rescue the person from file. Originally bike through fire but we modified it last minute
-Save the alligator from polluted water
-Chase away the zombies
-We had another stop, rescue the sick person, but the tweens were pooped so we didn't do this.

So, what does a $5 DRT look like. All items salvaged from the Goodwill or from free sources.

Save a Puppy:
Originally I had little shoe boxes to attach to bikes to put the puppy in because it seems so cruel to zip tie them to a bike, no? Our participants were on Dad's bike so a quick modification with pipe cleaners.


Rescue a person from Fire:
My toddler had taken our hula hoop and broke it. So, it was sitting in the yard with nothing better to do. We taped some streams on the halves and tada, PINK FIRE. Originally, this was to be bike through fire but again modified to fit the situation.


Save the alligator:
We came upon a cute alligator in some really polluted water. The alligator was immediately adopted by this new family and will be living in cleaner water. 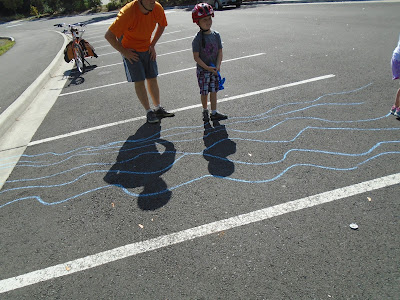 Chase away the zombies:
Apparently the zombies invaded our ride and we were forced to chase them away. How dare they! The tweens had mask and could hardly see where they were running but the little kids thought it was funny. Remember to make holes so you are not running blind. 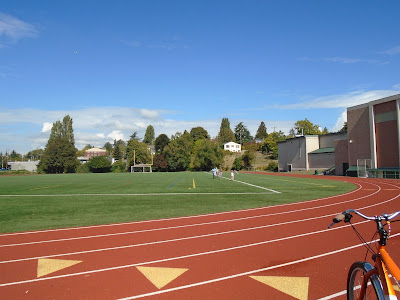 Cure the sick person:
Okay, this was going to be gross and I forgot hand sanitizer so we just skipped it but it did involved the tween girls putting candy dots on their face and the kids wiping them off but I forgot the baby wipes. 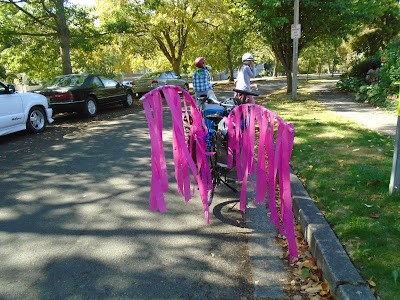 Pink fire looks really cool when it's hanging from the back of your bike. It also works better than shame flags. Wave one of these around and see what happens. 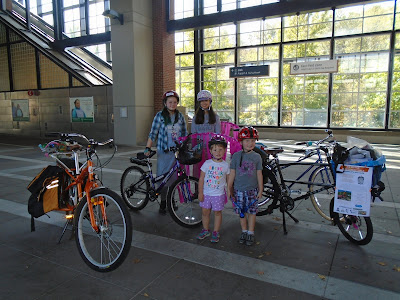 We made it to Hub Fest but the tweens were quickly bored so we left. The nice part about using a smaller bike is that we just hopped on the light rail to go home. 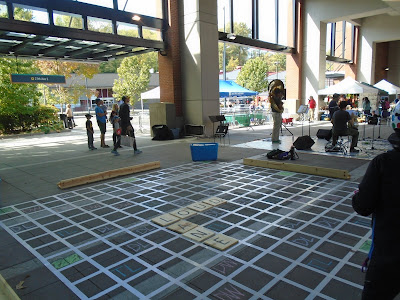 Before leaving we checked out some of the displays including this GIGANTIC scrabble board made by someone at SDOT. As cool as it is, we were not too into it. 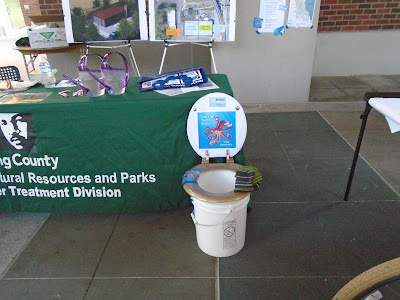 Lastly, we got a bit of education regarding waste treatment. So in a real emergency here somewhere to go because all have to use the potty. So maybe next time I will splurge and spend $10, fancy. Most likely I will be repeating this for Team Mama Bears as a test. So, watch out.