So, I did something that is weird. I watched that hot diggy dumb movie about 50 Shades. I am interested in movies that take place in the town I live so I was watching it for the Seattle scenery and not the other stuff that goes on. Right? Sure, right!!!

In any case, when that novel came out I managed to escape reading it even when it was offered for FREE on kindle or on loan from the library. While the intellectual novel of our time, reawakening the souls of the bored won so many hearts,  I want to know, WHY THE HECK WAS THE VIADUCT CLOSED? Why did SDOT feel compelled to block off street? What the heck is going on?

So, ready for some sexy pictures. Go get yourself a NACTO planning guide, a feather and some beer because here is 50 Shades of Grey from a transportation story point.

Our story takes place in some college blandville town in Oregon. Anna goes to the big town of Seattle to meet her doom/destiny. Yeah, my summary is going to be so bad I don't even know what the real story is. To top it all off I was mildly watching it and had my twitter feed on the other side of the movie window. Okay, so don't correct me!

In the world of CARS no way would she ever take public transportation to get to Seattle. It's not like we have Amtrak. NOT SEXY ENOUGH!

Then she gets to Seattle and the banjos start playing because WHAT the hell is this? A building that is taller than four stories? What kind of magical place am I in? She even takes a minute and says, "Whoah!" You know, the plot line and the script writers were paid mucho dinero to put this novel to film.

The plot thickens because this hell hole of traffic was caused by bike lanes. Beep beep, Seattle Times Op Ed, eat your heart out!

In the meantime Mr. Grey is getting dressed and you realize he's not that rich. Who's richer or more fancy? Dr. Strange. I mean, what kind of watch is that Christian, quartz? LOOSER! Only rich people have self winding watches. Let me show you.


You're a big boy because you can put cufflinks on. Good for you. The story progresses after Mr. Fancy pants puts on his fancy pants clothes and heads out to work in his CAR!

Why couldn't the fish truck crashed while this was filming? Fun, traffic is fun! A collision would have added a whole new dimension to this movie. More boring junk happens in this movie but what's this? They walk near a really full bike rack. Where is this mythical bike rack? Come on!

Then they go to this place. I'm sure Christian doesn't live here because he lives in the Escala building. We'll get to that soon. Oh but this isn't even Seattle. Look at the protected bike lane? Seattle would never spend money to make a wall of protection. No, we get it in the form of popsicle sticks, smurf turds and finally a scattering of planters. That's Vancouver!! Oh Canada!


Blah blah, fancy pants has a helicopter. Yawn. He also has a whole bunch of cars, yawn. Anna is impressed because honky tonk town girl is impressed with cars. Where is this? I had no idea you could ride your bike, I mean helicopter along the highway.

I bet someone could date this picture by the color of the wheel. Have you noticed a theme? The sun is never out. This movie gives you the impression Seattle is a dark and sad place. Maybe it is.

Apparently Mr. Grey lives in Escala. You know, those jerks who don't want their view blocked. You know, these owners. So, the nightmare is that someone is a NIMBY, BOOOOO! 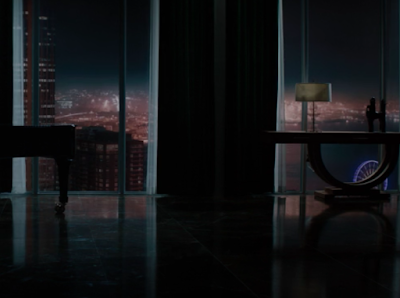 Is Escala that close to the wheel? Hum, let's investigate. I guess so, because this article says the penthouse located below the fictional unit is $8.8 Million. So affordable. I'm glad these peeps are into preserving views, SAVE OUR VIEW. When you go to a meeting to protest wear a grey scarf. Protest scarves are in. Could that movie really increased the "value" in these dwellings? The actual penthouse sold for $6.2 million.

Then we get to the sexy part of this whole movie. The reason the viaduct was closed. Really? It was to film a U-haul, a VW and some other random car drive across? For this? Nothing explodes and no fish dumping. I thought this movie was going to be super exciting, sad.

Let's get real. This isn't even Seattle in the background, looks too flat. Christian is probably sending another email objecting to some building blocking his view. NIMBY! Preserve my view!

The mountain is out!

Here is how it ends. Huh? Do you see that? Is that a sharrow? Does the airport have a street with a bike lane or sharrows? Stop lying to me because I'm sure this is Canada.

What did I learn?

1. If you are looking for bike/ped/bus/train infrastructure, you won't find it. Rich people have CARS

3. Everyone who lives in Escala is a NIMBY.

So, you can now go on with your life and never ever have to see this movie because I saw it for you. You're welcome. If you wanted to see a movie about torture someone needs to make one about crossing the streets of our fine #VisionCaca city.

Hey There Rainier Ave: In the Era of Rump Roast

Well, road channelization has been great BUT it hasn't been extended to the part I live on. So, what happens where I live?

Let me guess, wild parties? Nope, we get collisions. SURPRISE! Before I even show you those pictures let's take a look at what's been happening so far.

Right now the salt in the wound is Rainier/S. Holly. Why this intersection? This is suppose to be a greenway intersection. You know, an all-ages-abilites route. We have to get through this intersection 4 times a day at least. It's a pain in the butt.


Some people have no problem running over kids. She couldn't wait for us to get through the crosswalk. #RainierAveSucks #VisionCaca pic.twitter.com/lCJDSEW2e9
— No Spandex Required (@NoSpandexReq) January 31, 2017

Sometimes drivers don't care when kids are walking across the street.


Ready to play? Do you see a car? NO lights but keep complaining about pedestrians! pic.twitter.com/bKbvWDfiCW
— No Spandex Required (@NoSpandexReq) December 6, 2016

Do drivers always care about safety? Sure! Don't turn on your headlights. It's not like it's dark outside.


Sometimes I misjudge a situation. Bus blocks crosswalk and I end up on Rainier in the LEFT lane trying to get to the right, ugh pic.twitter.com/VgGWCfQQzW
— No Spandex Required (@NoSpandexReq) November 28, 2016

UGH, Bus is in the crosswalk, bus behind me is also turning. I could have died. Forget ever trying to ride on the road and trigger the bike sensor on the GREENWAY. What was the point?

Aww, special. When you hit the sign a fairy pops out of that building right?

Depressing to put up these ghost people.

I'm really stupid for trying the bike sensor. I try so hard and it never works.


Last night a driver ran this over. We need the road diet extended now! pic.twitter.com/KaV2FlAIwi
— No Spandex Required (@NoSpandexReq) September 15, 2016

Ready to play a game? Will the white SUV go through the red light? pic.twitter.com/G7VWf79E3g
— No Spandex Required (@NoSpandexReq) September 2, 2016

More fun and games. Go ahead. I can wait another signal so I can get across the street. It's not like I have places to be. My bike is not a form of transportation but your dilapidated car is.


I know, I found the ped walk. I torture myself because I am curious about the changes to Rainier Ave pic.twitter.com/LVXokTvnBE
— No Spandex Required (@NoSpandexReq) July 14, 2016

Sometimes I try to find out what the heck is going on. Hi SDOT.


Rainier/Lucile: looks like we are getting a traffic island for peds and flashing beacons pic.twitter.com/4fMJWOGFBP
— No Spandex Required (@NoSpandexReq) July 14, 2016

That's great road diet area but when will I get safer streets. Phase 2 now.


Tough luck getting across Rainier because there is the sensor. Aww 😎💩 pic.twitter.com/7KmWQ3WDUo
— No Spandex Required (@NoSpandexReq) July 11, 2016

I truly must love torture because I try this sensor way too many times.

Then we have the grand finale. TOOT TOOT, CRASH!

On the evening of 2/1/2017 a driver caused a collision so bad it took out power lines and managed to wedge their car between the bus stop and the South Seattle Senior Center.

Aww,  speeding is for demons and idiots with cars.

Did you not get a close look? Here you go.


In the end nobody was hurt but seriously who needs to die? Kids going to/from MLK Elementary, someone at the Senior Center, people from Immigrant housing, me and my kids?

Rainier Ave is getting changes but not soon enough. We can only hope that the kickoff event for the road diet extension means real changes will happen sooner before someone dies.


Well DUH but glad we now have statistics to prove what a crap intersection this is. pic.twitter.com/4eSanV0NyE
— No Spandex Required (@NoSpandexReq) March 8, 2017