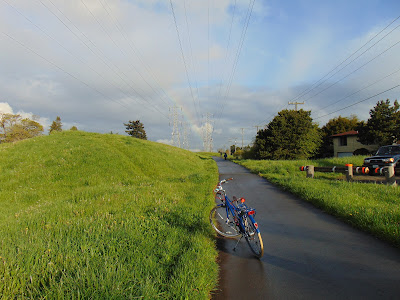 Biking the older kid to school is nothing new. Although, this was the first year she biked on her own all the way to school and home.

It was a year of learning too!
Our route at the beginning of the year meant we would bike on Martin Luther King, cut through some side streets by S. Alaska and make the difficult journey of biking up S. Columbian Way. None of it was nice. It was always loud and included risk. For every intersection we had to be vigilant someone wasn't turning or running a red light. MLK has become the new Rainier Ave. High speeds are normal but the good thing going is that we have the light rail track in the middle that act as a buffer.


Our route suddenly changed when a driver turning from S. Columbian on to a side street came at us so fast they almost hit us. Since I was basically blocking the road I motioned to this driver to roll down his window. I will have to note that after biking this way we met the neighbors on this street and many of them expected us to bike past at a certain hour. So, this driver didn't live on this street and he was trying to cut through rather than wait behind a pile of cars in order to turn on to Martin Luther King.

The man rolled down his window at which I told him that his turn was too fast for this street and dangerous. He didn't care because single occupancy driving is about one person, "ME". He revived his engine and made his merry way, no doubt my curse of instant diarrhea took effect immediately.

After this incident the tween, now teen, and I had a good heart to heart. We have to bike up the Chief Sealth to get to school. I know, it's hard and we might have to walk some of the hills.  A near death experience will do this to you!

So, we trudged along the E-W Rainier Valley Greenway and connected to the Chief Sealth.

We certainly biked in all kinds of weather. Wind, rain and we even did some icy morning commutes but were careful around the ice.
We tried using the light rail as part of our commute but it became difficult to get two bikes into a train car so we dumped this idea. This was one of those snowy mornings where we biked on the Beacon Hill greenway connection through Jefferson Park. 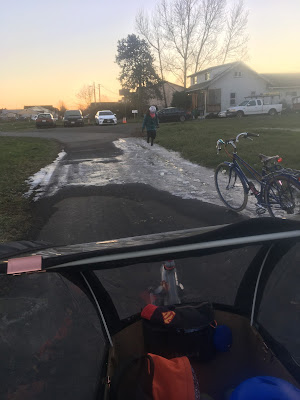 I know, we did bike when it was so cold some of the Chief Sealth was icy.

What happened was wonderful. We ended up having this special moment, once making up some hills, where the teen and I had good chats. Our bike rides home were downhill and I heard about how school went. So, this Mommy got a good school update. I honestly feel that our tween/teen hormone rage has been kept to a minimum because the trail is so strenuous who has time to have angst? 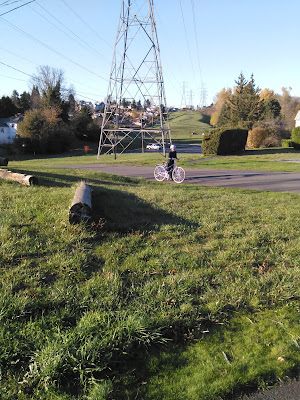 The experience also meant we became stronger riders. So when we took our trip to Portland I was able to bike a significant distance without assist and the teen could ride her bike with no complaints. Now when we bike up a hill she aways says, "that used to be harder". I look forward to our summer adventures with less complaining about the darn hills.