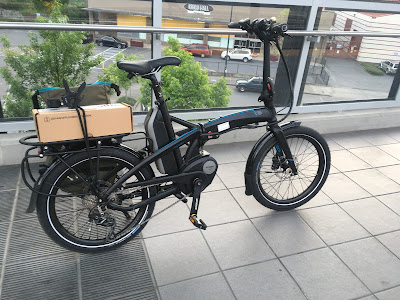 I've always wanted to write a review of low milage. Every time I come around to writing something about one of my bikes I've put in thousands of miles, yeah.

Remember how I sold the Edgerunner? Well, the money was kinda of sitting in a pot waiting for some other bike. I was hooked on the Tern Vektron when it hit Interbike. I wanted a low step-through folding e-bike with an integrated rack and whoohoo, Tern delivered.

Um, as I write this they have introduced the cargo version, the GSD, and wow but let's get back to the Vektron.

First of all, the bike is complete. When I mean complete, it has fenders, lights, rear rack, Yepp compatible, and a bell. I mean, even normal bikes don't have that. In addition it's a mid-drive folding bike. Oh and guess what, you can charge your phone. I think of it as the mini version of my long ago Edgerunner. Oh and it FOLDS!

If you are looking at a review about specifications this one does the bike justice: Bike Radar Vektron Review.

The Sound Transit LR has been a nightmare to get on and now we can magically fold the bike, hang the teen bike and sit down like normal people or just stand all smooshy. We fit in all the elevators. I mean, it's a magical experience.

It's like my dreams of many years were answered. Okay, it's a short term thing to put the toddler on the bike but that's not why I bought it. I also thought the teen could ride it on our longer rides and not feel like she has to catch up to me on the Metrofiets. It's been amazing!! Rumor has it, Mr. Peyos (6.4 tall and gigantic) could also ride it but he love his Brompton. Oh well.

Let's talk about how the features did in Seattle. You have to understand, I will put any bike through the grinder. Give me a bike and I will show you how well it will hold up. I might even crash it, which happened.

The FOLD: I'll be honest, I haven't folded it all that much just because it's so cute and tiny. It is still kind of bulky and heavy for me to carry but I learned that even the Brompton is kinda heavy for some people to carry. They are all faking how easy it is. I'm not SHE-Ra so I can't just lift that thing over my head and do a hula dance, okay. 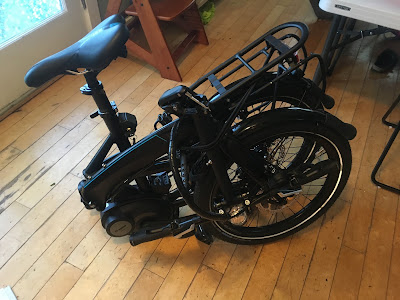 My first time folding the bike and I tried to look cool and made it look easy in front of Mr. Peyos. 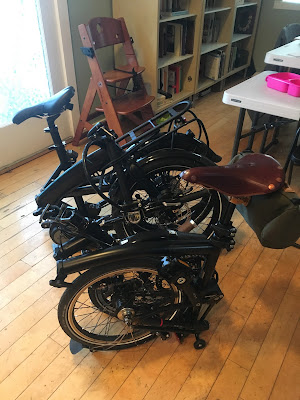 Then that jerk brought out his tiny bike and did this. Whatever DUDE! Aw, but it serves well to compare the fold and size. Instead of a banana for scale, Brompton for scale.


Icing on the cake was folding the Vektron and putting it next to the other bike. pic.twitter.com/sjTCaZaV8a
— No Spandex Required (@NoSpandexReq) July 30, 2017

Semi folding the bike and hanging another bike while on the light rail seems to come in handy. Mostly I try to hang it if I am not loaded with gear.

CARGO Capacity: I hate to break it to you bike manufactures, I will turn any bike into a beast of function. So, of course I am going to try to load up this thing.

Kid: The most wonderful thing about this bike is that the Tern Cargo Rack is rated to carry 55lbs.

Hold on there! 55lbs is a nice load BUT.....let's talk about the kickstand.

<Rant begins here> Why can't cargo bike manufactures get this right? Why? Why? I have one kickstand that I would trust and that is the Rolling Jackass that was on my Edgerunner but holy hell, why can't you make one that I won't break or semi- break or close to breaking? SHEESH! <End Rant>


Okay, seriously, if you are going to say 55lbs is the weight capacity then put a TWO pronged kickstand, none of this leaning business. I've already had to tighten it several times and I think curse words come out of my mouth when that happens. 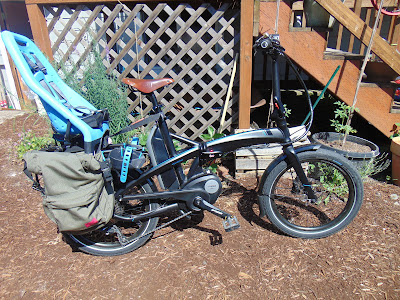 As you can see, the Yepp Ezee fit is compatible and you don't need anything extra BUT those stupid footcups, a Yepp issue, were modified when we were back using the Edgerunner. Yes, I have a special place in my heart for the way the seat with those footcups obstruct carrying capacity. Like everything I do, I made it work for me. I'm a monster and ziptied the cups so that my toddler doesn't kick me while riding AND I can have bags on the bike at the same time. 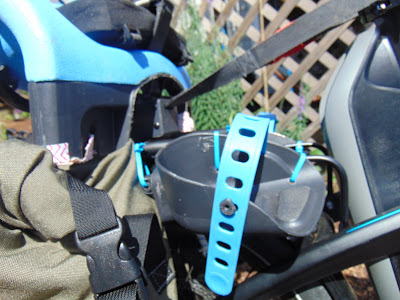 So, I'm not telling you to cut the footcups off because I'm a special unicorn and had to do it. Don't do it! 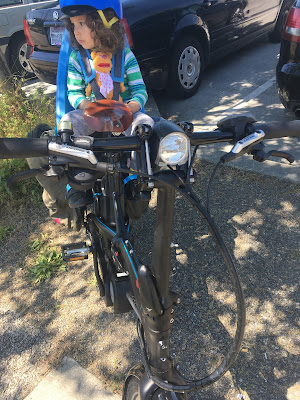 Our first ride included Fozzy and a very tired kid but it was good. See how the footcups held up to toddler super strength. No kicking! 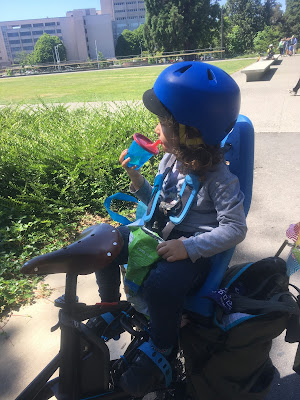 So, Tern did a good job making sure the rack integrated well with the Yepp which is a solid seat and one of the best ones to buy but the FOOTCUPS drive me nuts.

Cargo: Aside with my issue of holding the bike up fully loaded, cargo carrying capacity is very good. Oh, just so you know, the picture with the kid had me holding on to some part of the bike just because the kickstand and I are having trust issues. We might work it out in couples counseling.

I have loaded the bike under different circumstances.

Camping: The teen used the bike for a very long camping trip and it held a nice load and no issues riding. 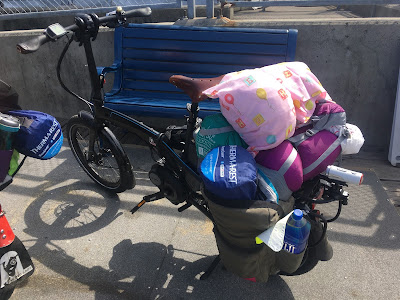 Groceries: I've carried a lot, loaded with and without the kid. At this point I decided to invest in the front rack called the Kanga. The rack is rated to only carry 14.3lbs but you know I will see if it can carry some extra weight just to see what happens. 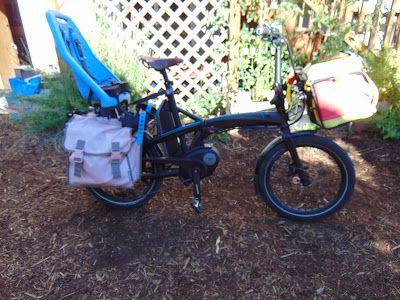 I tried mounting the cooler. Biking with kids means you carry an insane amount of snacks. Having a spot to put the cooler is important. The cooler didn't have the straps I liked to secure so this didn't work out so well in the long run. 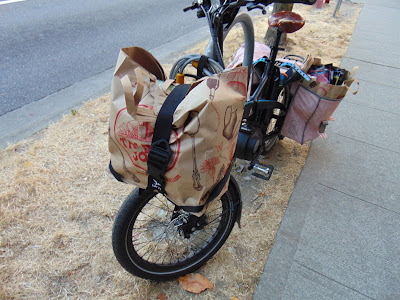 I tried biking like this with a bag of groceries, more than 14 lbs, but the rack itself felt wobbly  so don't break your rack. 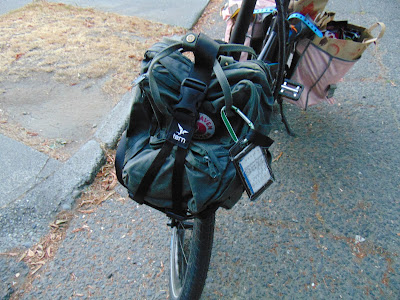 So, I moved the bag and put my backpack in front and the ride was much better.

3 really heavy bags worked great. I suppose someone would ask if it felt tippy but it didn't. The kickstand held for non-human wiggling cargo, so it was alright. 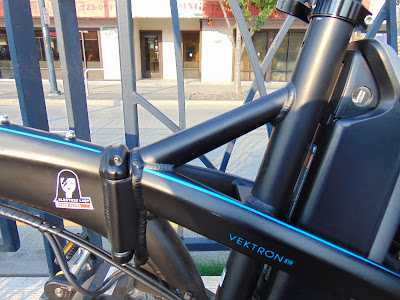 This part of the bike makes it easy to grab and lift the bike. I hate lifting any bike but this makes my life easier. Something rubbery and gripy might help to facilitate lifting. 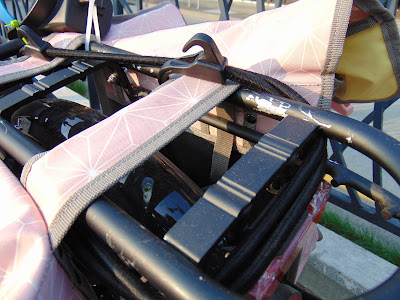 This picture shows the bungee. I love the bungee and it comes with the bike!

Needs some improvement:
I love the rear rack. It does a good job but I am not sure what the coating is on it because it scratches really easily. As you can see, it has battle scars. It's not a super big deal but I see powder coating in the future. I might even have it done in a different color, cool. 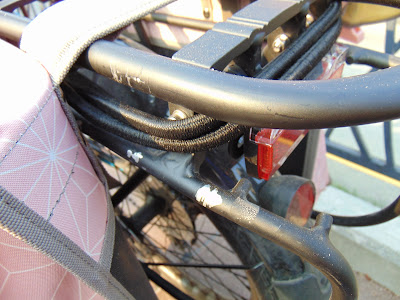 The Assist: I live in Seattle and our hills are not tiny humps on a map, they are really hard core killers. So, you want to be able to go up them with ease and grace.
The bike comes with four levels and currently Economy mode serves most of my needs except when going up some crazy hills so I kick it in Turbo.

Economy Mode: The teen did our bike camping trip in Economy mode and the controller told her that she could easily do 90 miles! Then again, we did rolling hills on the Kitsap Peninsula and nothing too crazy.

When I am in Seattle, if I keep the bike in Economy mode the bike tells me that I can bike 40 miles. 40 miles is a good range to go somewhere and not have to charge it. Loaded up with a kid it's a different story and I get maybe 5 miles less but biking with the kid exclusively on this bike is not the goal. I bought the bike to be able to fit on the lightrail and fit in elevators so we can go farther without having to ride there all the way.

Charging the bike is fast and easy. The battery is tiny, light and portable. Cafe charging is a great option.

Crash: I actually crashed the bike. My toddler was doing some crazy move at the same time I was trying to dismount and we entered into a seam in road and went down pretty hard. I didn't ride for a couple of days but we were fine and so was the bike, no issues. The location for the battery is mounted in a great spot and the mid-drive stayed in place. I took a picture 5 minutes before we crashed. Ugh, balloons.

Conclusion: I really LOVE this bike. It's a great commuter all around fun bike. As you can see, we did more than just buy groceries.  It does well for my needs and can carry my toddler until he reaches the weight limit but I would recommend this for people who want to bike far in one charge. The issue with most e-assist bikes is that you end up worrying about running out of charge. The big gold star is that it folds! Say you run out of battery you can always fold it can get on the bus, bike to light rail or just use a Car2Go. I haven't used it with Car2Go but it does it.

Tern: If you want me to test the heck out the GSD I will bike the heck out of it. Oh, I am NO KIDDING! SEND ME ONE! Mama Bear bike club will run that bike through the ringer (Edit, really meant wringer, but ring ring telephone ringer)!